This young woman’s exaggerated pose and the way her hair streams up away from her face suggest she inhabits a dream world. She holds a needle and thread, leading us to wonder what she is looking for, and what she hopes to piece together. The dark background seems about to envelop her, giving an epic and nightmarish feel to her lonely quest. Barry Cleavin works within the long European tradition of printmaking, adopting and developing techniques to best suit his purposes. This beautiful but disturbing image illustrates both his technical virtuosity and his ability to create a scene of great intensity within a relatively simple composition. Born in Dunedin, Cleavin studied at the University of Canterbury, graduating in 1966. He was a lecturer in printmaking there between 1978 and 1990. Cleavin is recognised as one of New Zealand’s foremost printmakers, receiving many awards, including a Fulbright Fellowship in 1983 and a Trust Bank Canterbury Art Excellence Award in 1997. Cleavin has exhibited widely throughout New Zealand and internationally. 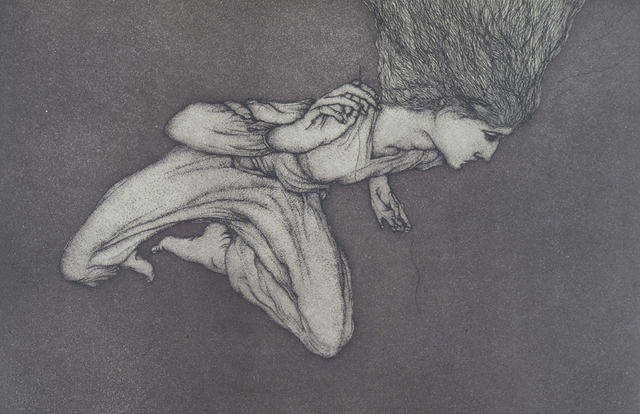