Although a prolific artist, Salvatore Castiglione is known by just two identified works – this signed etching and its original study. Most of his work was made in the workshop of his older brother, the leading Genoese painter and printmaker Giovanni Benedetto Castiglione (1609–1664). The brothers were an artistic team until Giovanni’s death. Both made etchings of this subject, one of Jesus’ most stirring miracles, from The Gospel of John. Castiglione has intensified the drama of Lazarus raised to life through an apparent borrowing from Titian’s Transfiguration (1560), a painting he would have seen in Venice, presenting Christ in a radiant burst of light, with billowing robes and hands outstretched. 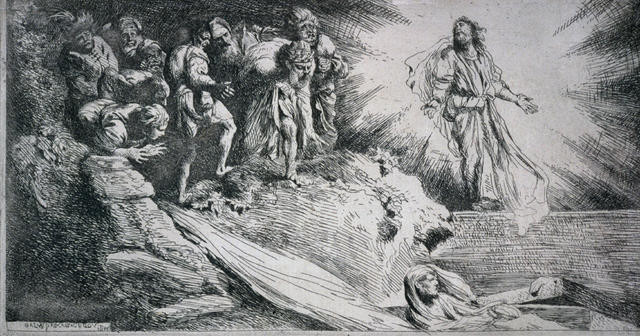