Goodrich Castle lies a few kilometres south of Hereford, standing on a wooded hill overlooking the River Wye. The area was a favourite with David Cox. For several centuries Goodrich Castle was the royalist home of the Earls of Shrewsbury, but in 1646 it was captured by Oliver Cromwell’s men, who destroyed it. In 1836, the year this work was completed, Cox started to paint on coarse, textured paper that gave his work a distinctive character. It was suited to his rapid strokes and his representation of windswept landscapes with rough atmospheric effects. Cox was born in Birmingham, where he was apprenticed to a painter of miniatures before becoming a scene painter at Birmingham’s Theatre Royal. In 1804 he moved to London to concentrate on becoming a professional artist. He is considered one of the leading masters of the British school of landscape painting. Cox published a number of books on art, including ‘Treatise on Landscape Painting and Effect in Watercolours’ (1814). 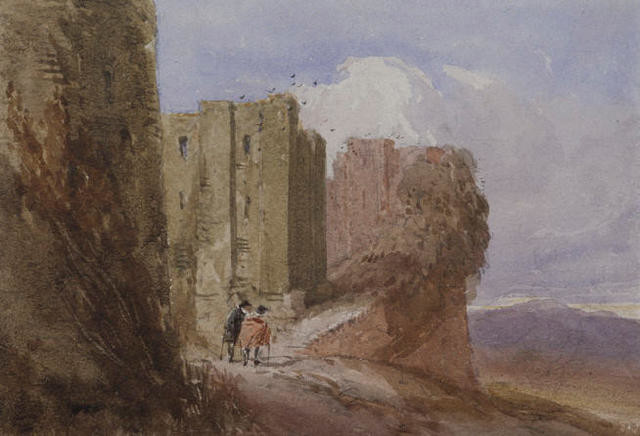