This original sketch is possibly from the series ‘Mr Bramble’s Visit to Bath’, which Thomas Rowlandson produced between 1790 and 1798. One of England’s great satirists, he recorded with sympathy and good humour the follies that he both saw and shared in Regency England. Rowlandson’s style was purely his own. He would draw a bold outline with a reed pen in a tint composed of vermilion and Indian ink. The general effect of chiaroscuro (light and shade) was then washed in, and the whole work was then slightly tinted. Born in London, Rowlandson’s talent was soon evident in the caricatures he did of his teachers and fellow pupils at school. He began studying at the Royal Academy Schools in 1772, before being sent to Paris in 1774. On the death of a wealthy aunt in 1780, Rowlandson inherited seven thousand pounds and other valuable property, which he eventually gambled away. He was a prolific artist and produced a remarkable number of works. 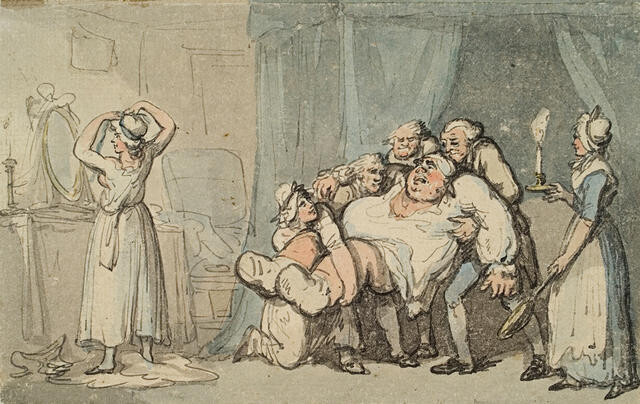