The subject of this work is the removal of Christ from the cross. Quentin MacFarlane completed the painting when he was still a student. It was a bold move on the part of the City Council Arts Advisory Committee in 1958 to buy an abstract work from such a young artist for the Robert McDougall Art Gallery and it provoked considerable disagreement. MacFarlane has abstracted this work into a number of blocks, each defined within a black border. His interest in abstract painting has been influenced in particular by European Abstraction.

MacFarlane was born in Dunedin and studied at the Canterbury College School of Art. He held his first solo exhibition at Gallery 91 in 1960 and exhibited with The Group in Christchurch from 1960 to 1977. In 1966 MacFarlane was a founder member of the 20/20 Vision group in Christchurch. He was awarded a Queen Elizabeth II Arts Council Scholarship for Established Artists in 1974 and a Travelling Scholarship to Europe and America in 1988. 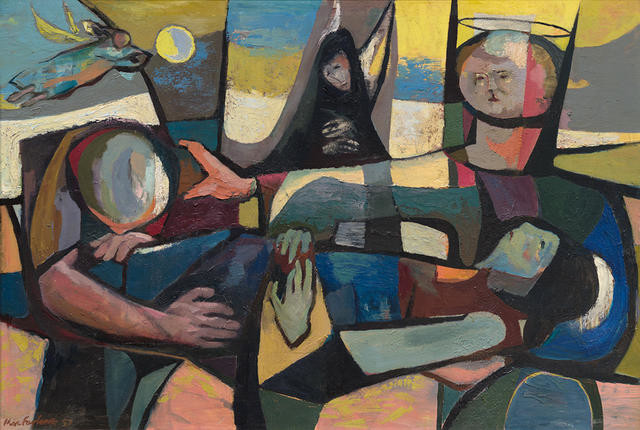