It is likely these were tomatoes in Juliet Peter’s own garden in Ngaio, Wellington. She and her husband, fellow artist Roy Cowan (b. 1918), had settled in this bush-clad area when, in 1955, they returned to New Zealand from living in England. Peter often used the watercolour medium and Tomatoes is painted in a loose manner with broad thin washes of colour, which gives the work a luminescent quality. Peter was born in mid-Canterbury and studied at the Canterbury College School of Fine Art in the late 1930s. Peter and Cowan married in 1952 and went to England. Peter enrolled at the Hammersmith School of Art where she developed an interest in ceramics and lithography. The couple brought back to New Zealand a printing press and electric kiln and by 1960 were working full-time at ceramics and printing from their home. Both artists were at the forefront of the pottery movement in New Zealand during the late 1950s and 1960s and were foundation members of the New Zealand Print Council, established in 1967. 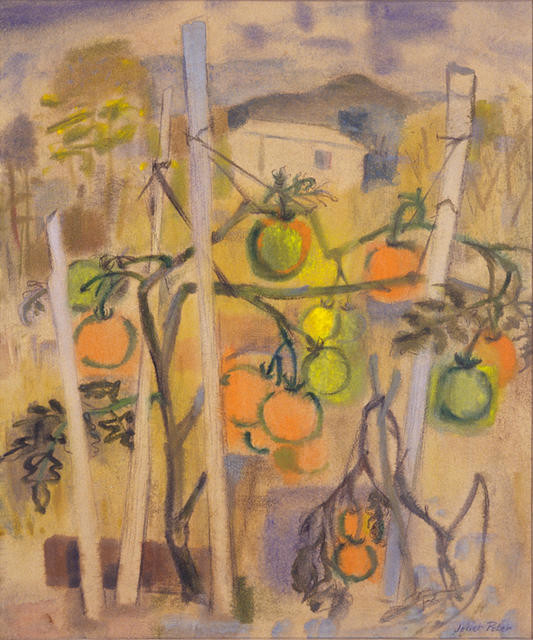