To protect their northern border from the Germanic tribes in the second century, the Romans built Porta Nigra, a fortified gateway to the ancient town of Trèves (today known in the English-speaking world by its German name, Trier) in Germany. The building was converted into a church in the 11th century. John Burgess was an English topographical watercolourist who specialised in studies of architectural subjects. He worked by making rapid pencil studies on the spot, and his skill lay in being able to achieve accurate, concise views. Born in Birmingham, Burgess grew up in an artistic environment. His father, John Cart Burgess, was a flower painter and his uncle, H. W. Burgess, was a landscape painter to King William IV. Burgess was taught to paint with watercolours by his uncle, and they often went on sketching trips together. In 1840 Burgess settled in Leamington where he lived the rest of his life. With the support of fellow artist George Cattermole, he was elected an Associate of the Old Society of Painters in Watercolour in 1851. 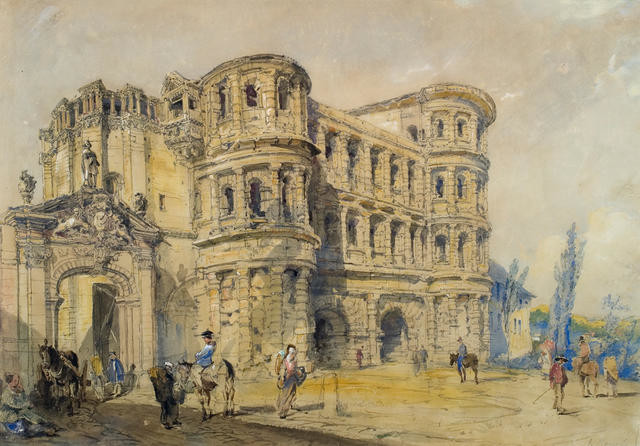