Petrus van der Velden was celebrated as a distinguished European artist on arriving in Christchurch in June 1890, when his immediate goals were also made known. His published intention, while ‘at present staying with his countryman, Mr Van Asch, at Sumner’, was ‘to make a long sojourn in the colony for the purpose of thoroughly exploring its beauties and making pictures of the scenes which take his fancy’. Van der Velden is known to have exhibited just one still life painting in the Netherlands, Stilleven, in a solo exhibition held in Rotterdam in October 1890, four months after his arrival in New Zealand. A contemporary reviewer noted that ‘all his paintings are treated in a dark colouring with remarkable light effects’, a description matching this work. A friend later sent out paintings to New Zealand; this dynamic study of summer’s harvest shows the same spirited approach that he would soon bring to painting the New Zealand landscape and is almost certainly the work shown in Rotterdam. 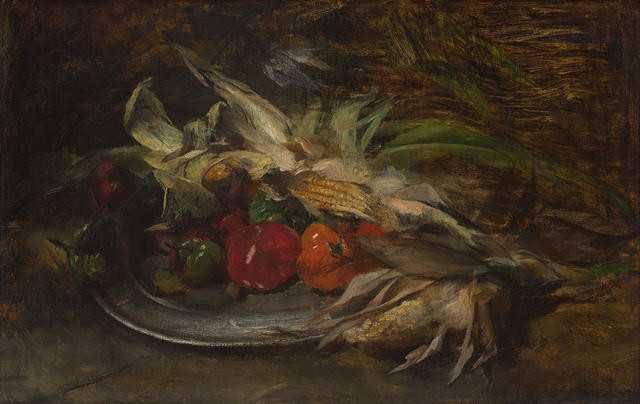