In 1948 Eric Lee-Johnson and his family went to live in the Hokianga region of Northland, where he began to paint his immediate rural surrounds.

This watercolour study of a derelict cowshed at Koutu, with its theme of abandonment and decay, aligns Lee-Johnson to the contemporary British Neo-Romantic movement. Leading artists of this period include Paul Nash and John Piper, whose work Lee-Johnson became aware of when he was living in London from 1930 to 1938.

Born in Fiji, Lee-Johnson moved to New Zealand with his family in 1912. He studied at the Elam School of Fine Arts in Auckland and from 1927 worked as a lithographic artist and illustrator for publishers Wilson and Horton Ltd. From London he returned to Wellington but in 1943 established his studio in Auckland. He held a number of solo exhibitions over the years and in 1952 and 1953 was included in the ‘15 New Zealand Painters’ group exhibition held at Irving Galleries, London. 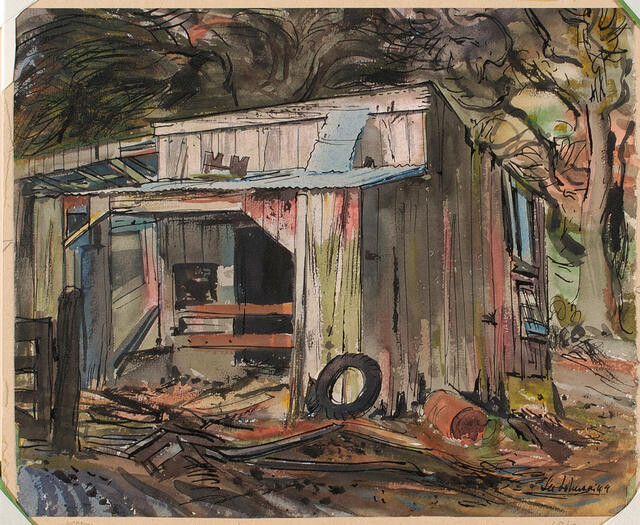