Robert Ewing McDougall (1861 -1942) was the benefactor of the Robert McDougall Art Gallery, Christchurch’s public art gallery from 1932 to 2002. McDougall was the Managing Director of Aulsebrook & Co., which, by 1928, was the largest and most modern biscuit and confectionary factory in Australasia. During the 1920s and 1930s Archibald Nicoll was one of New Zealand’s foremost portrait artists. Capturing a good likeness, he has painted McDougall in the style popular in the early 20th century where blocks of colour define the forms.

Born in Lincoln, Christchurch, Nicoll began evening classes at the Canterbury College School of Art in 1905 while working for the Union Steamship Company Office. By 1908 he was an assistant art master at the Elam School of Art and Design in Auckland. He later studied in London and Edinburgh. Following war service, in 1919 Nicoll was appointed Director of the Canterbury College of Art. In 1947 he was awarded an OBE for services to art. 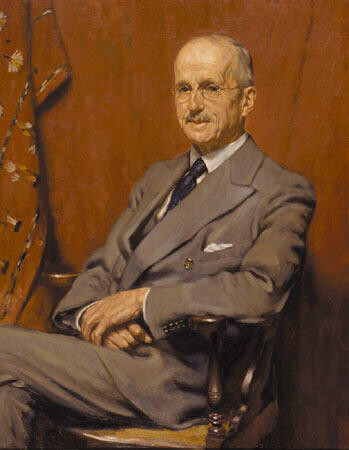