George French Angas was an English traveller, artist, natural historian and ethnographer. In 1844 Angas spent four months in the North Island of New Zealand, briefly also visiting Queen Charlotte Sound in the South Island. Although Angas represented Māori in a sentimental light, he believed in British superiority over indigenous cultures, which places his work within the cannon of colonial representations of New Zealand. Here we can see the remarkable whare tūpāpaku (tomb) likely for Te Paia Tiaho, or Princess Sophia, the daughter of the first Māori King Pōtatau Te Wherowhero. Angas noted ‘I found the monument in a tolerable state of preservation: it is about twelve or fourteen feet high, and the carving which displays exquisite skill, was entirely executed by one man, his only instrument being an old bayonet.’ (March 2018) 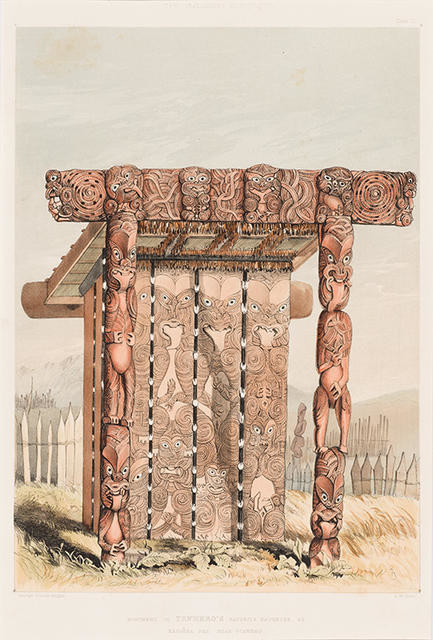