Summer Storm Near Wanaka is a painting from the second great phase of Doris Lusk’s work. Along with other progressive young artists in the 1930s and 1940s, Lusk had approached the New Zealand landscape with a modern eye and a hard-edged technique, interested not only in its industries but in representing characteristic local landforms. In the early 1960s she began a new period of experimentation in which her work grew increasingly abstract. ‘I’m not an abstract painter,’ she noted in the late 1960s, ‘But I am very much in sympathy with abstract painting. I admire the way my students can cope with abstract painting. But I am very interested in the wider implications of landscape…’ In Summer Storm Near Wanaka, she reduced the dramatic landscape of Central Otago to a rhythmic series of brushstrokes and daubs that convey a remarkable energy. The clouds boil over distant hills, and powerful natural forces shape the land into alien contours. Lusk made many paintings over several decades in the Central Otago region, continually drawn, as she said later in life, to its ‘curious tonal quality, its lack of conventional greens, and the brilliant light and most intractable colour of those hills’. 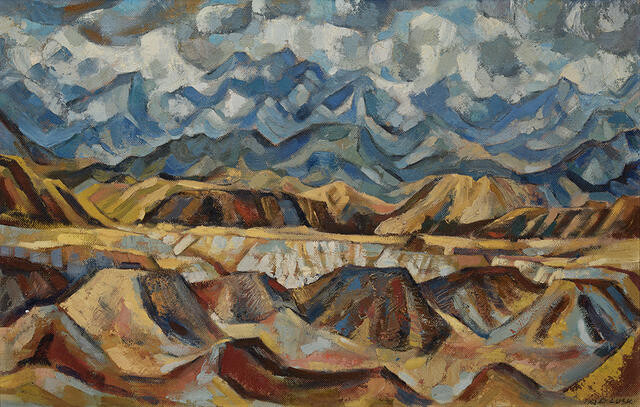