Atkinson's visits to Antartica in 2000 and 2003 left her fascinated by the traces of history left on this spectacular continent by early explorers. Much of her subsequent work has explored the gap between Antartica as an experienced reality and as an imagined, often romanticised, landscape. it also considers the political and territorial 'owernship' of the continent, which has been hotly contested since its discovery. This work focuses on the little-known German Antartic exhibition of 1938-9. This Nazi-party-overseen expedition carried out an extensive series of areial photographic missions, which observed and charted nearly a fifth of the continent with the aim of securing territorial and whaling rights for Hitler's Germany. The mapped area was named Neuschwabenland (New Swabia) and the German claim strengthened by dropping several thousand Nazi flags as well as metal poles featuring a swastika and the expedition insignia. 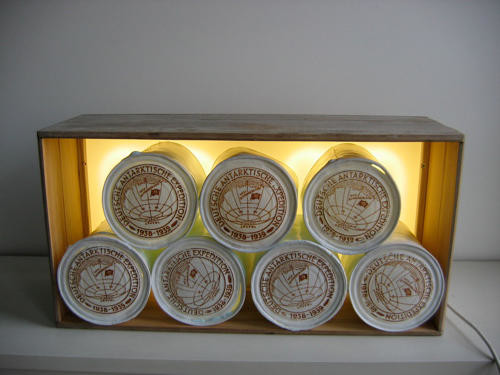