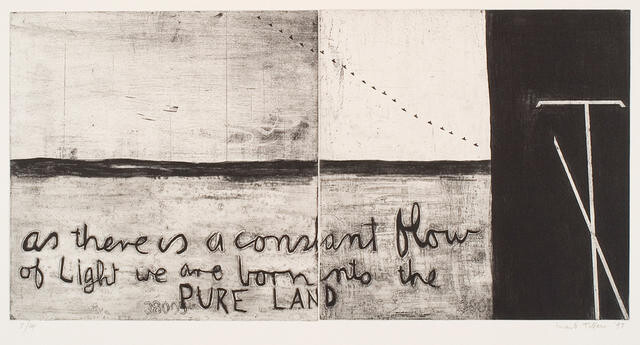 ‘As there is a constant flow of light we are born into the pure land.’ Colin McCahon quoted this text often on works between the mid-1960s and early 1970s: he took it from the writings of a twelfth-century Japanese Buddhist monk, Shinran, who was the founder of a tradition known as Pure Land Buddhism. McCahon had long been interested in light as a metaphor both for faith and enlightenment, and had begun a related series of dramatic semi-abstract waterfall paintings in 1964, in which a curve of white light cleaved through darkness. Here the landscape element has been reduced to a simple horizon, a dividing line between sky and sea, or sky and land, at the very edge of vision. (March 2018)