Milan Mrkusich has combined acrylic wash, metallic gold and finely painted lines to create an elegant, precise, contemplative work. Against a fog of black, the four suspended disks offer a series of points for the eye to rest on.

One of the first artists in New Zealand to paint in a consistently abstract manner, Mrkusich’s overriding concern has been the subtle relationships between colour and form. This work is from the ‘Elements Series’ which he began in 1965.

Mrkusich was born in Dargaville. His parents had come to New Zealand from Podgora, Dalmatia, and in 1927 the family moved to Auckland where Mrkusich attended school. Largely self-taught as an artist, he began painting in 1946 and held his first solo exhibition in 1949. In 1982 he was included in the 48th ‘Carnegie International’ exhibition in Pittsburgh. One of New Zealand’s most accomplished abstractionists, Mrkusich was made a Member of the Order of New Zealand in 1997 for his services to painting. 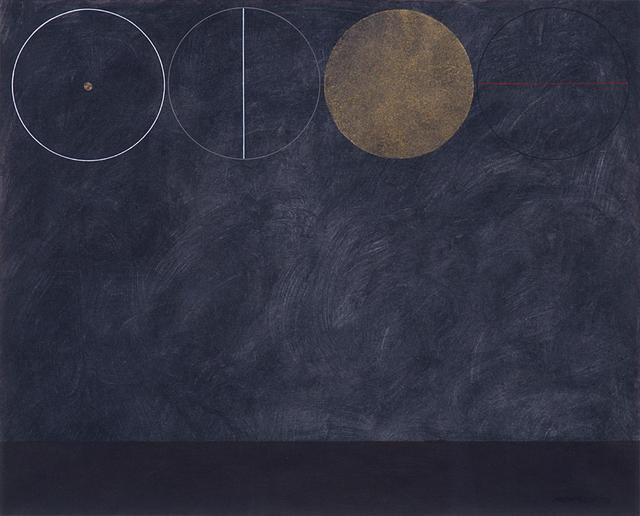