On the occasion of the artist's death in May 2021, this work was displayed with this label:

Arone Raymond Meeks was one of Australia’s most celebrated First Peoples artists, known for his fluid, multi-layered paintings, drawings and prints. He was also a teacher, Indigenous healthcare activist, book illustrator and co-founder of Boomalli Aboriginal Artists Co-operative, the first Australian Indigenous artists collective. A Kuku Midigi man, Meeks grew up in Far North Queensland, and he combined knowledge of traditional art practices passed on to him by his uncles and grandfather with Western-style arts training in Sydney.

“After graduating from art school, I soon discovered the mainstream art world had a very limited ideal about urban Indigenous artists. Our artwork was not deemed Black enough to be considered ‘traditional’ and not white enough to be considered ‘mainstream’” he later wrote. In response, Meeks and other Indigenous artists began to stage their own exhibitions, and he went on to develop a practice that was acclaimed within Australia and internationally.

Meeks’s works often focused on cultural interaction; firstly between Indigenous and white Australians, and later between Indigenous cultures. He created this expansive linocut to mark the centenary of Australia’s six states uniting as a Federation. Skilfully combining a rich variety of images, including human figures, marine life and native vegetation, it represents people and their activities as an integrated element of an abundant natural world. 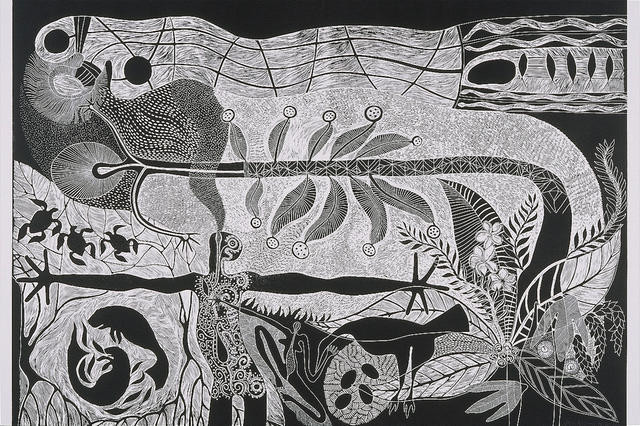