Sarah Maindolnald reads her own poem, Sea in a bottle, written in response to the exhibition Te Wheke: Pathways Across Oceania at Christchurch Art Gallery Te Puna o Waiwhetū 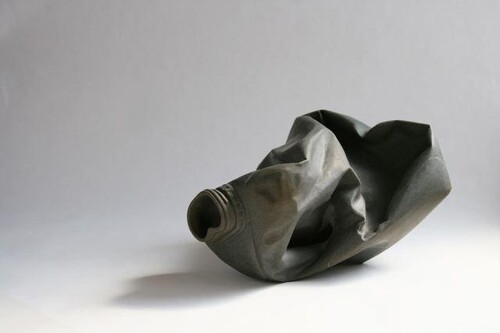 it holds the ancestry of our peoples, it is extinct,

it holds each summer frolic,

it holds the memory of Maui’s birth,

it holds the memory of ice which covered the planet mammoths moa mother,

Tangaroa’s anger lives in this bottle,

in defence of his mother

he gouged his brother’s side

sand ran out between his ribs becoming skeletal,

from Japan, from Bikini

where is the mother?

draped on the bones of the multitudes

he longed to be deep within her

snuggled soft with his siblings

we searched for the quick fix,

the coke and sex on the beach

the genome of a people

…. seeping into the ocean.

he longed for the abundance she sheltered in her crevices

sustenance for the generations to come

a death that tortured her over decades

she roused in struggle, regained the power of her limbs

but then they attacked her heart, the blood stopped flowing

we are skeletal, putrified, dissolved

the sea in a bottle….