This article first appeared in Stuff online on 6 October 2015.

In the summer of 1929 Evelyn Page took her painting gear from Christchurch to Karamea on the West Coast.

Karamea is the northernmost town of the coast, a settlement at the mouth of the Karamea River which flows through the remote and beautiful Kahurangi National Park. It's very nearly at the end of the line: the road runs out a few kilometres past it.

Page had spent some months the previous year a little further south in Westport, filling in for friend who taught art at the high school. Back in Karamea for the summer, and with a composition in mind, she persuaded a local woman to model for her.

Summer Morn depicts a nude figure from behind. The figure stands at the edge of the riverbank, one hand on her hip, the other steadying herself on a tree branch, utterly unselfconscious — the Karamea Venus. Sunlight sparkles and dances across the surface of the water in a glorious profusion of impressionistic dabs of colour. Below the female figure are two young women in summer dresses looking up from a moored rowing boat. Page admitted many years later that the third figure holding the parasol was, in fact, her model's husband, a local shopkeeper, wearing his wife's pink voile dress and with a brown scarf wrapped around his head.

Page's favourite class at art school had been drawing and painting from life. She and her friends often modelled for one another in the 1920s. But when she exhibited three female nudes in Auckland in 1926, controversy broke out in the newspapers. There was no strong tradition of exhibiting paintings of nudes in New Zealand, and little biblical or history painting in the public collections. Landscape painting was the local tradition.

In 1931, the critic A.J.C. Fisher, writing about the companion piece to Summer Morn, Pohutukawa Rina, commended Page for "tackling the difficult problem of the nude in the open air".

Summer Morn was well received when it was shown at the third Group exhibition in September 1929. James Shelley described it as "the most interesting picture in the gallery". "It is," he said, "a finely composed piece of decorative realism—real enough for us to enjoy the brilliant sunshine and decorative enough to suggest that it might be called Variations in Green and Pink."

It sold from the exhibition to an artist of an older generation, Rosa Sawtell, who left it to the Robert McDougall Art Gallery on her death in 1940. It was hung immediately, and remained on the walls until 1944, when a letter arrived from a firm of Christchurch solicitors.

The solicitors, who represented Page's acquaintance, the model on the Karamea riverbank, requested that Summer Morn be taken off public display during the lifetime of their client. She had visited Christchurch on holiday, and had unexpectedly come across the painting in the gallery.

As Page recalled, the model wrote to tell her that "to my horror I saw my own backside on the walls!" She asked if Page could have it removed: "I just can't live with the thought that the public can see me whenever they like."

Through her solicitors, the model offered to replace Summer Morn on the walls of the McDougall with another work and commissioned Grace Butler to paint a landscape. Butler's Summer Time, Arthur's Pass was presented to the Gallery in 1945.

Although it was the only work of hers that had been acquired for a public collection, Page was supportive of removing Summer Morn from exhibition, and advised her friend to write to the City Council. The Town Clerk instructed the gallery's custodian to take it down; and it remained in storage until the model's death in the late 1970s 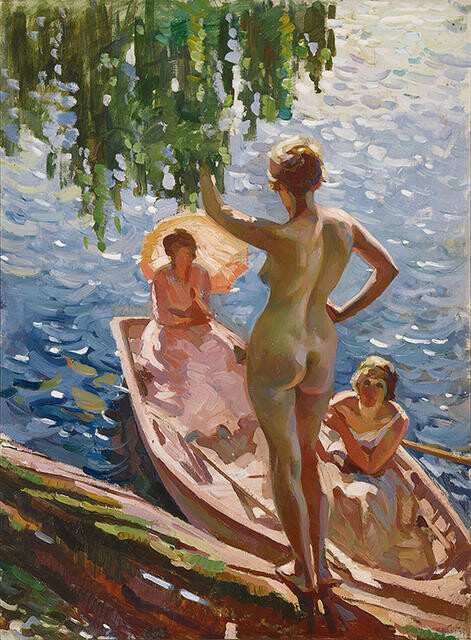 This scene is on an island in the Karamea River, on the West Coast where Evelyn Page went on holiday with friends during the summer of 1929/1930. The model for the painting banned it from being displayed during her lifetime, so it has been able to be exhibited only since 1978. Page has used an Impressionist style and, apart from the dominant figure, the main focus is on the effects of light in the outdoors environment, with strong highlights on the heads and shoulders of two of the figures and reflections on the surface of the water.

Born in Christchurch, Page (née Polson) studied at the Canterbury College School of Art. A member of the Canterbury Society of Arts, in 1927 she also joined The Group, formed to give artists a greater say over showing their work. Page spent a year in Britain in 1937 and on her return she and composer Frederick Page married. In 1947 they moved to Wellington from Governor's Bay, near Christchurch.