This article first appeared as 'Bright sparks from the worlds of arts and science' in The Press on 3 March 2015. 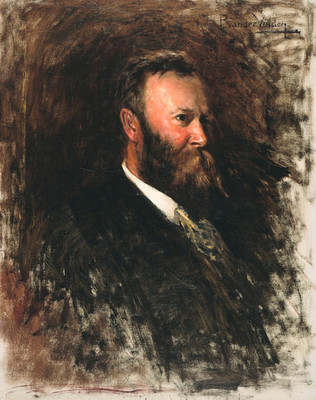 The Dutch artist Petrus van der Velden—described after his death as 'a prince among painters who have ever come to New Zealand'—only lived in Christchurch for eight years between 1890 and 1898, but made a profound impression both on local artists and on local culture. He was a flamboyant, outspoken character who wore a slouch hat tilted to one side, and a cloak thrown over his shoulder "as though to leave his sword arm free". With his pointed beard, he reminded locals of Frans Hals's Laughing Cavalier. His thoughts on life and art, his connections to European culture, and the example of his work ('solid and serious', according to Van Gogh, whom he'd known in Holland), inspired a generation of local painters.

Van der Velden's friendship with the equally outspoken Professor A.W. Bickerton began not long after he arrived in Christchurch, and involved agreeable conversations long into the night about philosophy, politics and religion. Bickerton was a prominent scientist who taught physics and chemistry at Canterbury University College; his most notable student was Ernest Rutherford. Bickerton had developed his lecturing style teaching general science to working men in London in the early 1870s, where he commented that he needed to be 'as entertaining as a music hall and as sensational as a circus.' His lectures always involved practical demonstrations of scientific principles (and occasionally explosions).

Bickerton's radical views on marriage and his open support for socialism were equally incendiary, and resulted in an ongoing feud with the university authorities. In 1894 he appeared before a committee set up to enquire into the management of his department. The findings were unfavourable, but he retained his job and was granted a year's leave, which he spent developing his ideas for the 'federative home', setting up one of New Zealand's first communes at his property at Wainoni (Bickerton Road is named after him). Van der Velden's portrait of him is likely to have been painted during this year of enforced leave.

When Bickerton was eventually fired by the university in 1902, he developed his grounds into an ambitious public pleasure garden. He offered diverse attractions including a zoo, glasshouses, a Punch and Judy show, a merry-go-round, a working mechanical model of the universe, and clowns. But the main event was always Bickerton's pyrotechnic displays, which drew crowds of thousands. He would stage mock naval battles, involving carefully-timed fireworks and dramatic aerial rescues of sailors. For the grand finale, an explosive of his own invention called 'Splittite' was thrown into his artificial lake like a grenade, sending up a spout of water some 15 metres into the air. Bickerton called it the 'Wainoni Geyser'.

The Gallery's painting of this great Christchurch character is one of two known portraits of him by van der Velden, and was acquired from a member of the Bickerton family. The other portrait, a more formal depiction of Bickerton as a scholar, is owned by the University. The energetic, unfinished nature of the Gallery's portrait, with its rapid explosive brushwork, conveys something of the unbounded energy of the man, as well as the artist's sympathetic understanding of his character. 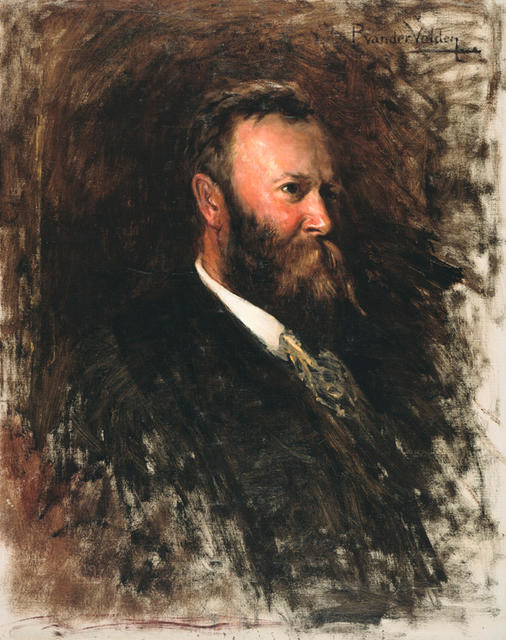 A. W. Bickerton, Professor of Chemistry and later also of Physics, was, in 1874, the first professor of Canterbury College. However, his controversial views and attacks on the Board of Governors lead to his dismissal in 1902. He spent the rest of his life advocating his ‘partial impact’ theory in which he envisaged a self-sustaining universe with no transcendent God. He was a popular and kindly man. Van der Velden and Bickerton were friends, sharing similar opinions on politics, religion and art. They were both regarded as 'bohemians' in the 1890s. Up until the 1980s this informal study of Bickerton lay rolled up in the possession of Bickerton's descendents. Born in Rotterdam, Van der Velden established himself as a painter, particularly of marine subjects, in Holland, from where he emigrated in 1890. Although he received a number of portrait commissions, he struggled to make a living in Christchurch and in 1898 went to Sydney. He returned to settle in Wellington in 1904 but died in Auckland.