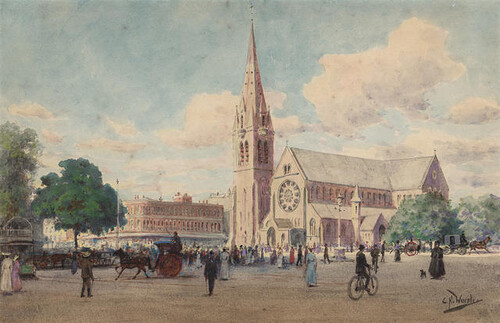 It's interesting to attempt adding sound to this picture – it has a little, but not a lot. There is the clip-clop and rolling clatter of horses and buggies; perhaps a polite bicycle bell and the rhythmic, overlapping march of steel shoe-plates. There might also be muted chatter; a light wind; sparrows and rustling leaves. The scene's imagined quiet and gentility appeals, as does the scale of the city that it captures. In 1906 when it was painted, the (still newish) Gothic revival cathedral held its own, decades away from diminishment by towering brutalism; even further from the unreasonable challenge of massively shaking ground.

As a visual marker in this city's story, this watercolour of Christchurch Cathedral Square is a more than useful recent addition to its public art collection. Its maker Charles Worsley (1862-1923) lived here for about two years from 1901, in a large, rented house on Gloucester Street just across from Latimer Square. Relocating in 1898 from England to Wellington, then to Christchurch and next to Nelson, he became a prominent exhibitor of his watercolours in all of the major regional art society shows. Described in 1906 as 'a celebrated English Artist out in New Zealand for his health', Worsley travelled extensively to paint the colony's scenery, which he also later exhibited to success in London. In New Zealand, many of the paintings he exhibited related to his continued European continental travels. In the New Zealand section of the 1906-07 Christchurch International Exhibition, his eight watercolour views of 'New Zealand alpine and river scenery' were deemed 'in many points the best landscapes of the collection'.

Compared to his grand exhibition pieces, this Christchurch scene is modest in ambition, having evidently been made for reproduction in a commemorative booklet, Souvenir of the New Zealand International 1906 Exhibition: Eight Views of Christchurch and Typical N.Z. Scenery. Worsley's scenic prints were being advertised at this time throughout New Zealand, as were his postcards depicting 'Scenes of Maoriland' and 'Birds and Flowers of New Zealand'. In Christchurch, his individual prints from this and other booklets were available for 6d each, or 3/6 for a book of eight. The price was double in Wellington, where it was claimed they had 'all the beauty of his original water colours', and that 'nothing like them has hitherto been seen in this country'.

Worsley spent the rest of life travelling between New Zealand and Europe and died in Italy in 1923. 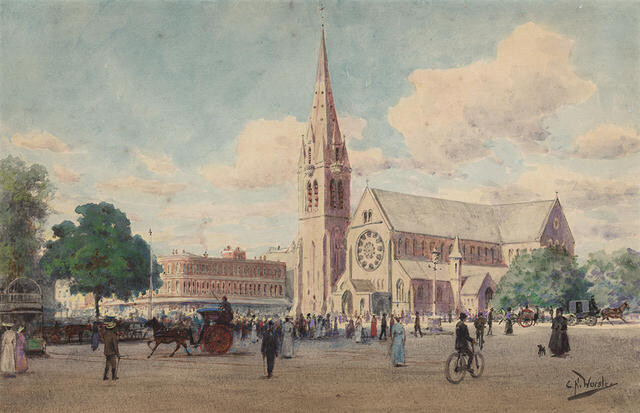