This article first appeared as 'Art at the gallop' in The Press on 13 July 2012. 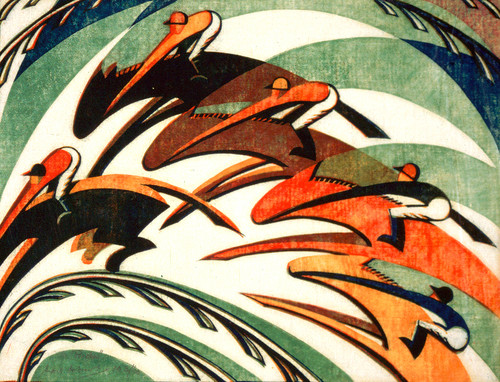 One of the highlights of the Christchurch Art Gallery's print collection is the British linocuts from the 1920s and 30s of which there are many key examples by leading artists. Among these Sybil Andrews' vibrant colour linocut Racing from 1934 stands out. Printed from four separate blocks, Racing conveys the speed and movement of horses and riders as they gallop round a bend in the track. Andrews often sought rhythms in her compositions, repeating motifs that cumulatively build up a dynamic and unified image and this is certainly true of Racing where jockeys and horses are repeated racing round the track. All seem desperately unified in their objective of catching the lead rider and winning the race. Slipstreams emitted from each horse emphasise the rush and energy expended by fully stretched galloping horses. The speed of the race is also emphasised by severe foreshortening of the curve of the inner rails which rush up suddenly from the bottom left corner.

Andrews and her partner, the equally talented linocut artist Cyril Power, were commissioned to produced a London Transport poster advertising Greater London's famous Epsom Derby in 1933 and it was this race which inspired Racing. Won in dramatic fashion by Hyperion, who broke away from the bunch and crossed the line several lengths in front of the main pack, it was much the same as the lead horse in Racing.

Christchurch has Rex Nan Kivell to thank for his generous gift of 300 British modern British prints in 1953 including Racing. Born in Cust in 1898 Nan Kivell grew up in New Brighton before moving to England in 1916, never to return to New Zealand. He was one of London's most prominent art dealers becoming a director of the Redfern Gallery during the 1920s and actively promoting the work of the linocut artists. Over sixty linocuts, including seven by Andrews, were included in his gift. They are among the most prized prints in the Gallery's collection. 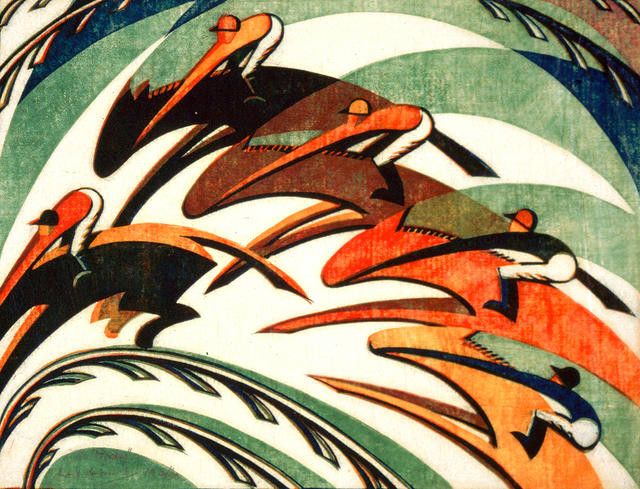