This article first appeared as 'Grand design' in The Press on 1 March 2013.

I was privileged to meet Doris Tutill (1916-2010) in 2007 while preparing for an exhibition celebrating the 125th birthday of the University of Canterbury's School of Fine Arts. Interviewing Doris for an online publication, I gained glimpses from her six years' study there from 1929 under an array of tutors including Cecil Kelly, James Cook, Julia Scarvell, James Johnstone, Francis Shurrock, Florence Akins, Hilda McIntyre and Louise Henderson. Each left their own strong impression.

Cecil Kelly taught 'a great deal of still life' and landscape. 'He took us out on the riverbank ... freezing, frosty mornings', she recalled, and 'into the old Provincial Council Chambers – a wonderful place to work – and it was freezing too. The janitor took out a portable stove to warm it for us. We used to climb up out onto ... various parts of the roof ... it was wonderful to draw'. James Cook taught pencil portraiture from life; Julia Scarvell taught design; Shurrock taught sculptural modelling. Doris would later achieve recognition for her needlework; most of her early training in embroidery and design was under Florence Akins, who 'gave everything to her students, and was totally self-sacrificial' (Akins died last year at 105). Louise Henderson also taught her embroidery one year: 'I was fascinated by her, by her [French] accent, her big brown eyes.' Doris described teachers bringing 'great baskets of things from the Botanical Gardens' from which 'we studied the principles of design, and studied the principles of growth – how it all adhered to certain patterns and principles.'

At ninety, almost completely blind when we met, Doris maintained a strong capacity to connect with others and owned a wise and peaceful soul. Bemused by the attention that Maori whare and tiki design had gained, a work completed when in her teens, she admitted that she'd known very little at the time about Maori art. Her art education had since grown: she was head of art at St. Margaret's College for 25 years, and focused on connections between historical art and faith while studying for ordination into the Anglican church, which she achieved in 1986. Despite her bemusement, this work continued to shine. In 2008 she donated it to the Gallery alongside several other works; later that year it joined an Art Deco feast at the NGV, Melbourne, as part of an Australasian supplement for a touring Victoria & Albert Museum show. A great and startling design, shown alongside architectural designs and ceramics utilising Maori motifs, her work was noted in the catalogue as a 'combination of modern styling and unmistakably New Zealand ornament [that] touched a chord with a nation struggling to establish a distinctive, modern self-identity'. 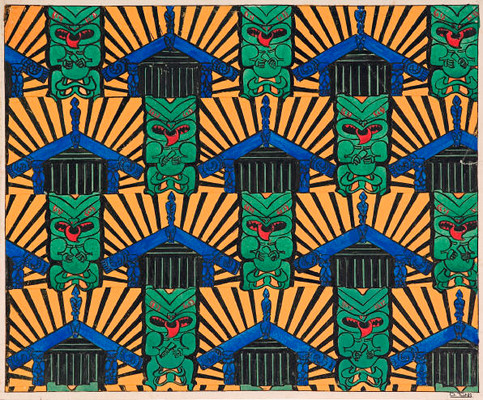 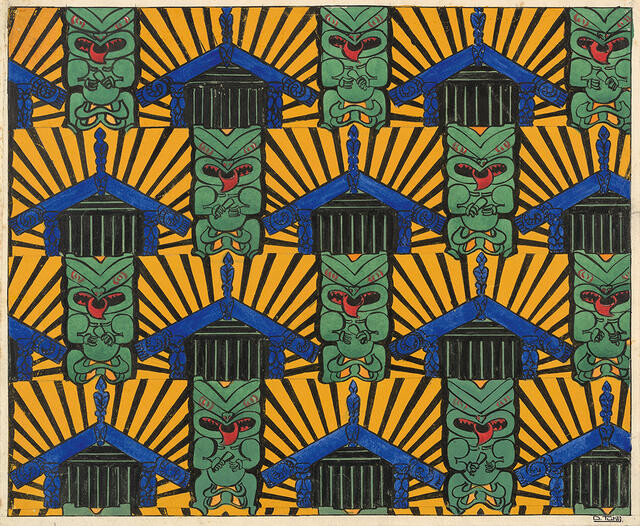