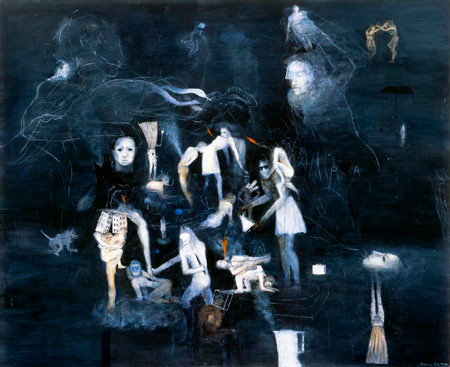 The tall white walls in Christchurch Art Gallery's contemporary collection display are brightly lit, but standing in front of Séraphine Pick's Untitled (1998) you can almost feel the night closing in around you. Across its midnight-blue canvas, a tangle of blurry figures play out a fragmented narrative that offers up all the confusion and complexity of a half-remembered dream.

In an artistic career that has spanned almost fifteen years and an exhilarating range of stylistic shifts, Canterbury-trained Pick has established a reputation for inventive, original images that are as emotionally and psychologically charged as they are wilfully enigmatic. From the spectral dresses and domestic objects that haunted her early works to the elaborately constructed tableaux of more recent years, Pick's imagery has always been powered by a formidable creativity, but it was in the blue and white 'dreamscapes' of the late 1990s that she really let her imagination run wild.

The works of that period – and Untitled is a prime example – propel us suddenly into intense and strangely unsettling fantasies, peopled by naked and half-clothed figures engaged in behaviour that is alternately violent, erotic and absurd. Governed by the spectacular, skew-whiff logic of dreams, the objects and figures in these moonlit worlds appear and disappear, defying gravity and all accepted rules of scale and proportion. Ordinary things metamorphose in odd and sinister ways; a figure is pulled out of the cavity in a woman's spine, a series of scratches are transformed into a throng of hooded phantoms, one woman's hands have become a bear's claws, and another woman's partner has the head of a wolf.

For the Surrealists of the early twentieth century, the human capacity to dream unlocked an artistic treasury – a magical, liberating environment in which reason, moderation and morality could be put aside to allow a true connection with the subconscious. In Untitled, Pick echoes their attempts to make visible the processes of thought, imagination and memory, conveying a mindscape that is both intoxicating and uncharted. Much is uncertain in this shadowy night garden. Do the couples embrace, or struggling violently against each other? Is it a cast of individual characters that we encounter, or multiple versions of a single personality, or even incarnations of a remembered or imaginary self? Are the people and objects symbolically connected, or simply the random non-sequiturs of a dreaming brain? As always, Pick's work provokes many more questions than it answers, tempting us to construct our own sequences of events and draw our own conclusions.

Not one to be bound by preliminary sketches or a stable, pre-planned composition, Pick prefers to let her paintings reveal themselves gradually and organically. With a fascination that seems to mirror our own, she allows her figures and arrangements to morph into other forms, calling to mind the intuitive and often nonsensical progressions of dreams and memories. In Untitled, the lines of a figure's shoulder are transformed into a ghostly flight of swans, while smoke from a stylised chimney becomes a voluminous cloud on which amorous couples can perch. Working into wet blue paint with the end of paintbrush dipped in white, Pick has covered over, scratched out and blurred the elements of her composition. That distinctive technique led this body of work to be described as "blackboard paintings" – an analogy that aptly conveys the fluid and elusive nature of memory and thought that Pick was trying to capture.

Shifting or obscured identities recur frequently in Pick's work, and the cluster of figures she has assembled here are no exception. While some faces are masked, others are concealed behind a variety of props, from sunglasses and veils to skirts that fall down (and up), disguising their wearers' features and shrouding expressions. One couple, locked in a standing embrace, have apartment buildings for heads, a startling progression from the paper bag people that gazed unseeingly out of Pick's earlier works. Intriguingly, for a painting crowded with faces, not one set of eyes will truly meet ours. Should we interpret these figures as real people? Or as the hollow shells of adopted personas?

Untitled's flat, inky background is not unlike a film screen, and its inhabitants seem to flicker in and out of focus, leaving haunting after-images behind them to light up the next frame. But it is when this painting is viewed as a darkened stage, upon which acts of memory, imagination and fantasy are performed and framed, that Pick's deliberate theatricality is most apparent. Her clambering, soaring, falling and grappling figures are far from static, but have been carefully arranged before their audience, and though she is unable to incorporate the sounds of a live performance, allusions to muted noises off - an old record player, the hiss of a just-boiled kettle, the empty speech bubbles that balloon from the mouths of several figures – can be found throughout the composition.

The playfulness of Pick's own approach to her works can perhaps best be seen in the silhouetted, black-gloved hands that gesticulate just below the mask at Untitled's centre left. In the time-honoured fashion, they form a shadow-puppet – though whether they suggest the wings of a flying bird or the jaws of a menacing wolf it is difficult to tell. It's as though, like Puck, Shakespeare's 'merry wanderer of the night', the artist is reminding us not to take what we have seen too seriously, since in the end her spell-binding creations are founded on mere illusion:

If we shadows have offended,

Think but this, and all is mended.

That you have but slumb'red here

While these visions did appear 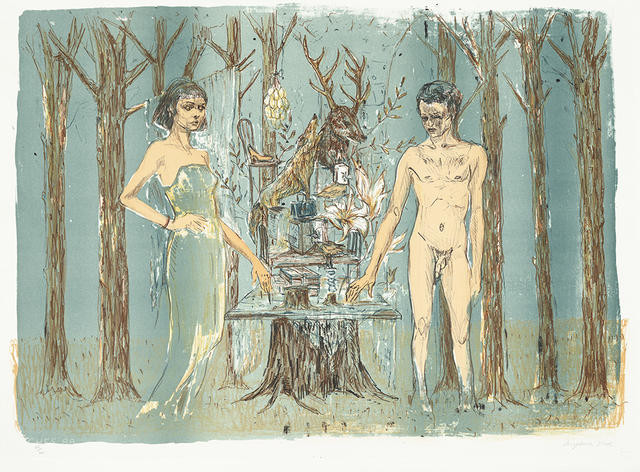 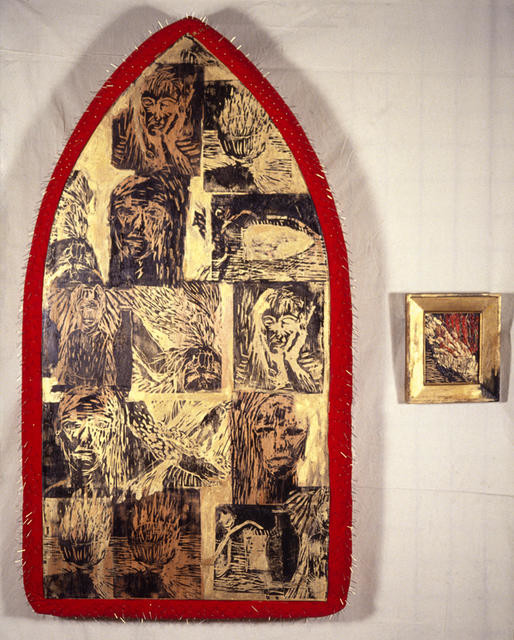 This early work by Séraphine Pick challenges many of the accepted traditions of art-making, including the hierarchy of subject matter and the nature of art materials. The Gothic arch or iron shape is edged with red velvet that has been pierced with dressmaking pins, and the images have been created using the broken lines of the woodblock, usually reserved for artist’s prints. Pick deliberately aligns the work's domestic elements with aspects of early religious art. The modern ‘homemaker’, represented in this work by self portraits of the artist, is compared to the medieval image of the Virgin Mary as mediator and nurturer. We are invited to use our observations and understanding of family life to draw our own conclusions.

Séraphine Pick was born in Kawakawa in the Bay of Islands in 1964 and graduated from the University of Canterbury School of Fine Arts in 1988. Best known as a painter, she has exhibited regularly throughout New Zealand since 1987 and has received some of New Zealand's most significant art awards, including the Olivia Spencer Bower Award (1994), the Rita Angus Residency (1995) and the Frances Hodgkins Fellowship (1999). 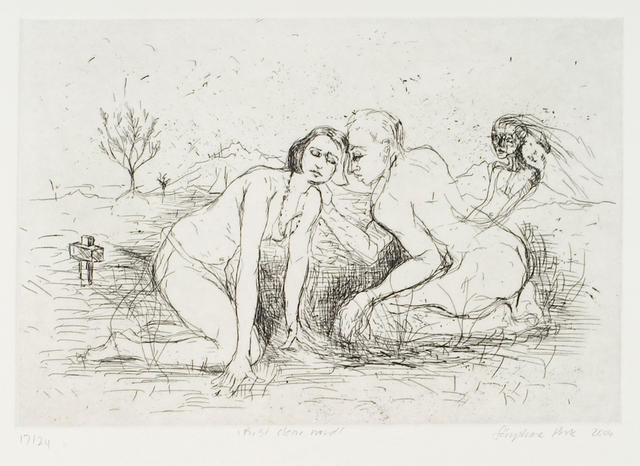 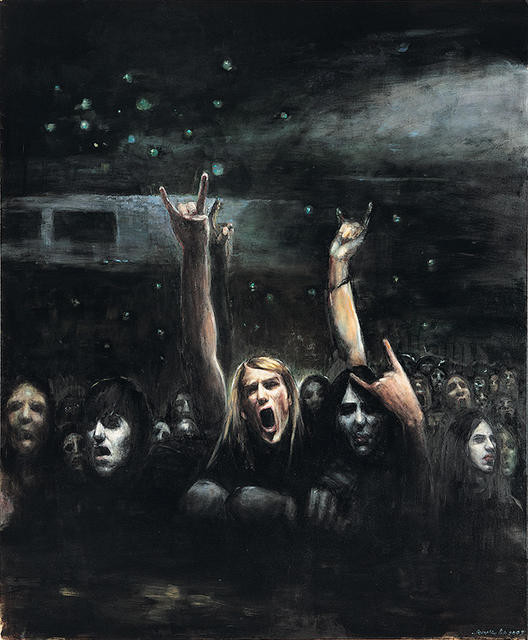 Séraphine Pick Hole in the Sky 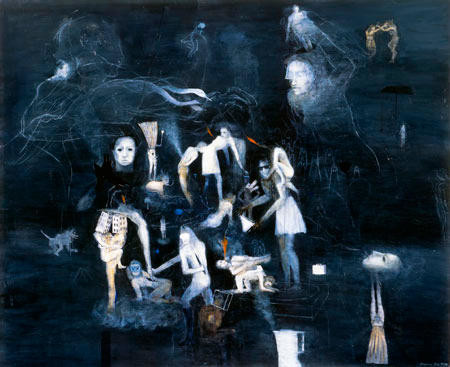 The focus of this painting is largely psychological. Figures and objects appear to emerge and recede between layers of paint, suggesting visions, memories or dreams, some of which are remembered clearly and others that return only as fragments. Although Séraphine Pick’s painting offers the viewer a choice of many possible interpretations, one obvious theme is that of changing or uncertain identity, shown in the concealment of faces through masks or blurring. Pick has painted some forms and figures onto wet paint, creating a faint, ethereal effect. Spaces are deliberately vague and planes overlap and interpenetrate with an individual logic and seemingly casual randomness which creates its own tensions and ambiguities.

Pick was born in Kawakawa in the Bay of Islands and graduated from the University of Canterbury in 1988. She was the recipient of the Olivia Spencer Bower Award in 1994 and in 1995 was chosen as the Rita Angus Artist in Residence. Pick was the Frances Hodgkins Fellow at the University of Otago in 1999. 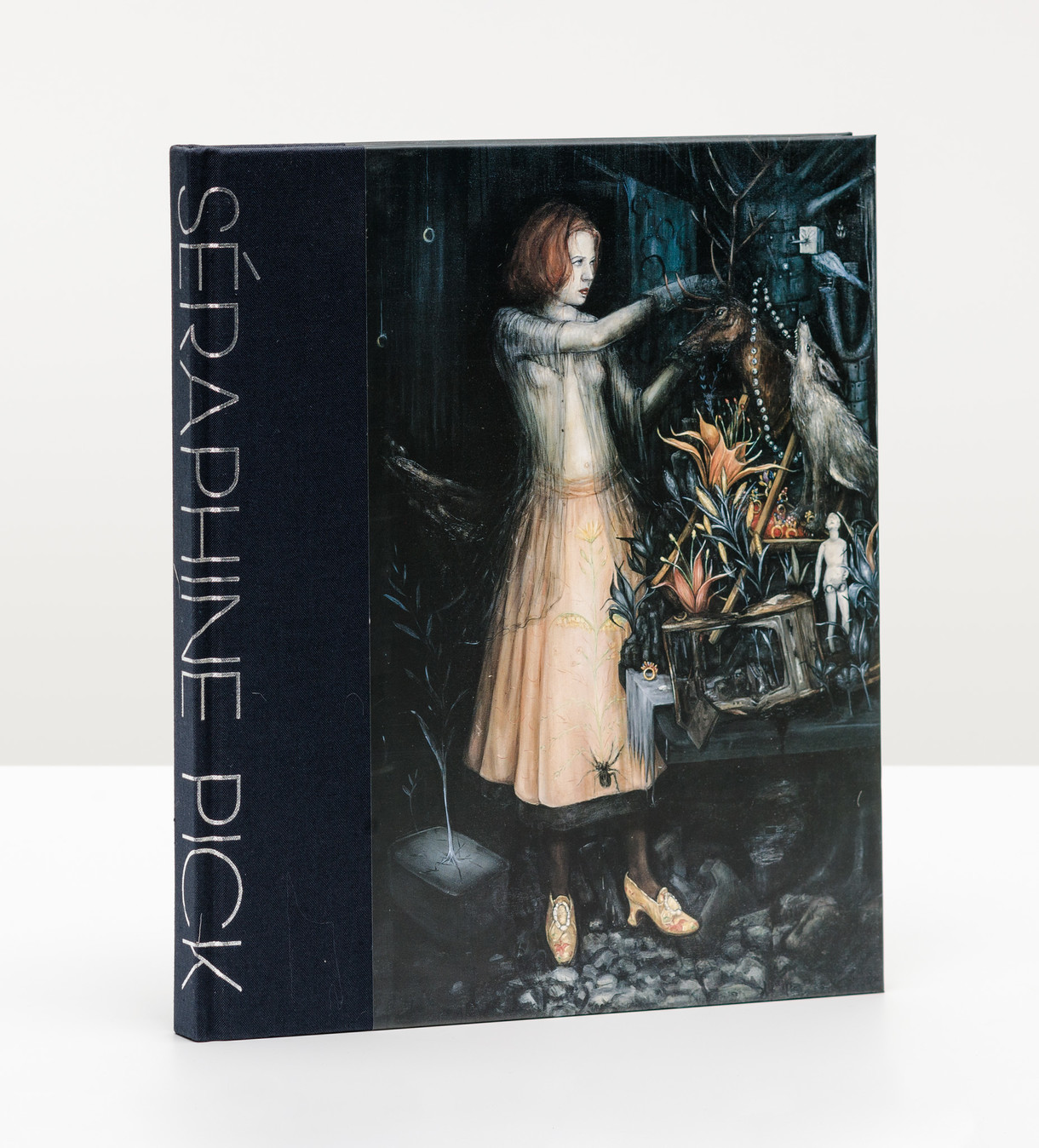