That deep colour of green, splayed out over the land as far as the eye can see, is dancing in the wind against a backdrop of blue and white. That beauty is mesmerizing, until you notice the ugly grey mass in the distance, its long cooling towers spewing out cloud-clad creations. It may not look all that bad to a passer-by or someone with no sense of nature's purity, but I know exactly how disgusting that sight is.

Their cotton-like disguise for the signs of their production, seeping out of the towers, flowing into the sky. Such things are atrocities themselves, whether or not they choose it to take this form, they're still producing their putrid filth in that plant, along with so many others. I can't stand it. My mind is running wild with hate for this. In the midst of my self-enragement, one thing comes to mind, as it always does when I gaze upon this sight: "If we continue along this path, continue this global abuse, then we'll build a future that won't allow us to disagree. We will become Silent Gods." I look away, sick of staring at that sight. It's all my window provides now; the sickening view of an infected beauty.I look around my sanctuary, my home. It is the only place that allows me to escape the ugliness of the current world. Brown wallpaper layered all over the walls, notices and articles shouting out how much decay there is in the world, hiding scratched patches of wallpaper as if they were abused children hiding from adoption. Pictures of smiling faces and distant places accompany these articles along my walls as a reminder of better days. I'm pulled away from all thoughts of those days and the current decay as my telephone pushes in line to my attention with its snaring ring. I can only imagine the disappointment that will soon crawl its way into my heart as I have been notified of yet another failed attempt at finally stopping that wretched business. I will never stop, however, until I've finally pulled the plug on Bellamy and his ignorance to see the wrong in what he's doing. After all, I am the only one who can do such a feat.

I move over to the little black device sitting on a small brown side table, adjacent to my lounger. "I don't even need to answer you. I already know how this will go," I say to the telephone, as if it were 'his' fault. Even so, I take a seat in the lounger and allow my hand to answer the incessant ringing. "Hello?" I ask, as per usual, seeming like I don't already know who it is.

"Good morning Haytham, its Rose," she soothes softly, "how are you?" Her coercive concern for my wellbeing is unneeded.

"I know what you're calling for, Rose. You don't need to act casual. You weren't able to get me in for a meeting were you?" I answer, my voice as monotonous as ever.

"Haytham...," she sighs, " you've tried how many times already? Every time he's said he's been too busy or something like that. You know he's just doing it so he doesn't have to listen to you go on about the 'impurity' he's causing. Maybe you should give it up?" What little sympathy there was in her voice was overshadowed by annoyance.

"I am not one to give up, Rose. You should know this by now. Is there any way I can actually talk to him? I just need to appeal to him. I can make a convincing argument when I want. And I have a few alternatives to what he's doing that might interest him." I was a good debater, and could often make people see my side as positive, no matter their own standing. "He's not a man to change his mind or, in case of his business, change his ways for a more expensive alternative just because it's healthier. I'm just trying to help you out here, and to stop you from wasting your time." Her consoling was abstract and ineffective. "But... if you really want to have one more shot at it you could go directly to his secretary. But, Haytham, if this doesn't work, nothing will, so will you please give it up if it doesn't work?" That was better. "...Haytham? Are you-"

I could feel Rose's smile as I finally say something nice to her. She was holding onto false hopes. "My pleas-" I place the phone back down on the receiver, cutting her off. Talking any more would prove unnecessary, and I needed to plan my attack. 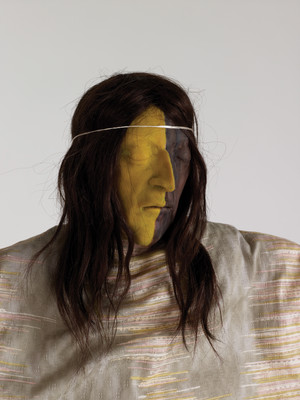 Based on 'Believer' by Francis Upritchard