Here's the Godley statue that was in the Square being craned into place. 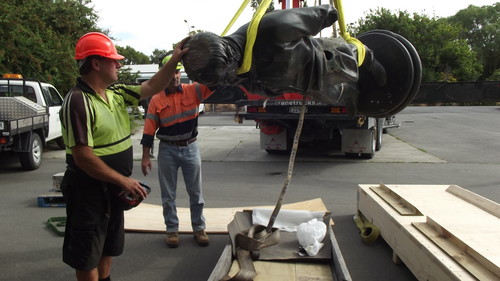 And here's his rather battered face in close up 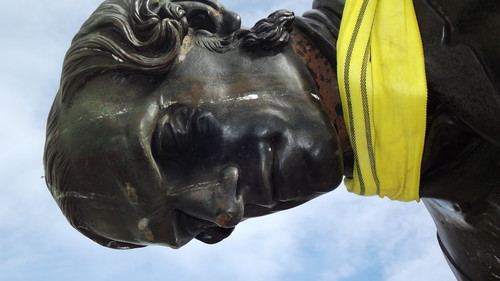 The sculpture is made of bronze and was produced by the artist Thomas Woolner, a member of the Pre-Raphaelite brotherhood. It was cast in the Coalbrookdale foundry in Shropshire in 1865. It was unveiled in Cathedral Square on 8 August 1867. On 5 March 1918, the statue was shifted to a new position to the north of Christchurch Cathedral to make way for a tram shelter. This tram shelter was demolished in 1931 and the statue was moved back into its original location in April 1933 after the removal of some trees from this part of the Square. The statue fell over during the February 2011 Christchurch earthquake. After a short sojourn off display he moved to the earthquake exhibition at Canterbury Museum opening on February 22nd 2012.

Before moving any sculpture a condition report has to be written to ensure no further damage will result from the move. This was done by Lynn, who says: "Despite a dented nose and separated cloak and arm Godley appears in remarkable condition for his age and was given a clean bill of health for the move."

The exhibition runs at the Canterbury Museum until 1 October 2012.