Move over, Banksy. Take a breather, Otis Frizzell. The Christchurch Art Gallery's elite force of street art archaeologists have located what is, according to our instruments, the world's feeblest work of protest art. Here it is: 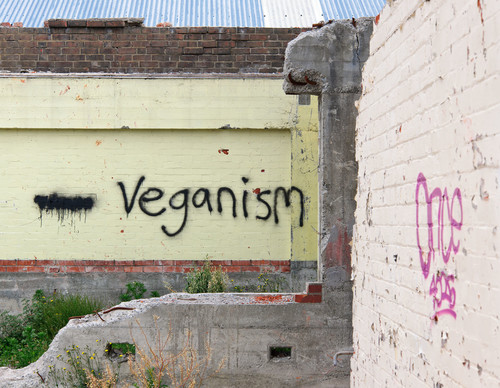 I mean, 'Veganism'? Yes, it's spelled correctly, but beyond that, what about it? In a month when protestors have gathered in unprecedented numbers in the inner city, and only a couple of months after Time magazine named 'the protestor' as their person of the year, would it have been too much to ask for an exclamation mark or maybe even a verb ('Banish...', 'Support...')? Or even – changing it up a gear – for that old standby, 'Meat is murder'?

Instead one stands there – and it's not an unpleasant sensation – thinking something like, 'Huh?'