Today is James Nairn's birthday, an artist who could arguably be described as the father of Impressionism in New Zealand. 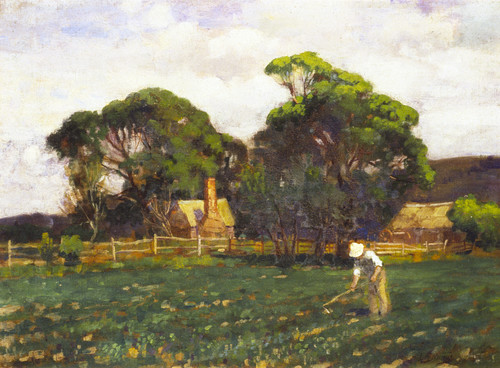 Nairn came to New Zealand from Scotland in 1890 and prior to this he had been involved with the Glasgow Boys, a group of artists interested in the Barbizon school and Impressionism. Nairn himself inspired many New Zealand artists with his plein air approach and interest in the effects of light on his subjects. Nairn moved to New Zealand primarily for health reasons and it was ironic that he died from a chill (which quickly developed into something far more nasty) caught while painting outdoors at Motueka.

Hoeing the crop is my favourite work by Nairn in the Gallery's collection. Conservation treatment of the painting for the exhibition 'Natures Own Voice' in 2009 revealed a date and more importantly the inscription 'Taita' which grounds the location of the scene. It's certainly not the Taita I remember from my childhood in the Hutt Valley. Nairn and his fellow painters sought rural subjects for their work and Pumpkin cottage was rented at Silverstream between Lower and Upper Hutt so they could take a break from the bustle of Wellington and retreat to the countryside. Of course the Hutt Valley has been built out since Nairn's day with much industrial and residential development having occurred particularly after the Second World War. Nairn's view is another world away.

Nature's Own Voice focuses on plein-air painters, who, through direct observation whilst working outdoors, aim to record the varying effects of differing light and weather conditions. 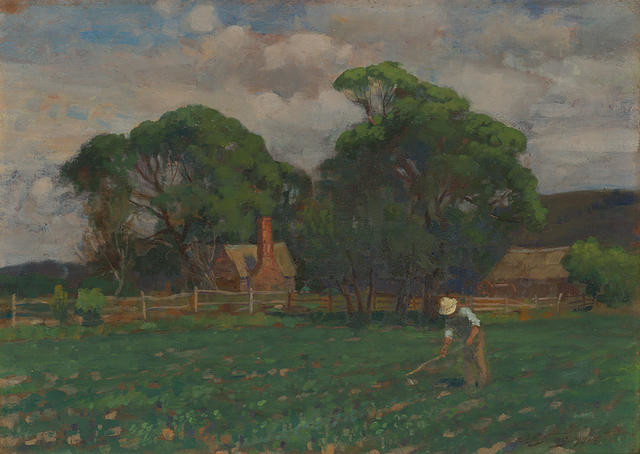 When this painting was cleaned in 2008 we were delighted to find an inscription and date revealed beside the artist’s signature: ‘Taita 1894–95’. Taita is located in Lower Hutt, just down the road from Silverstream, where Nairn and fellow artists established an artist’s colony at Pumpkin Cottage in 1894. Unlike the serene rural setting depicted in Nairn’s painting, Taita today is a sprawling urban centre that was developed after World War II. Nairn painted the sunshine, revelling in its warmth and brightness as it bears down on a labourer toiling away in the fields. With its spontaneous plein-air approach, scenes such as Hoeing the Crop highlight the influence the French Barbizon and Impressionist painters had on Nairn when he was painting in Scotland; an influence he in turn provided for local artists to follow. (March 2018)