Not titles of paintings this time, but whole survey shows. Your life as an artist is being summed up in one exhibition, and what are you going to call it? 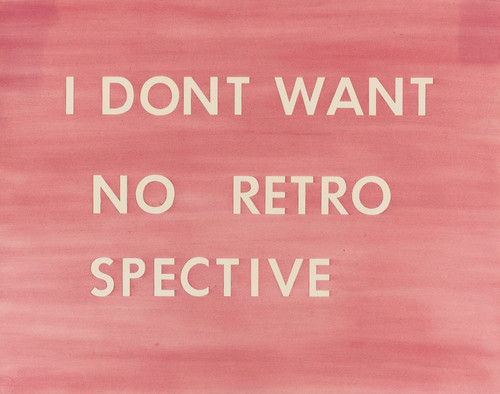 The default setting is to play it cool and run with your name by itself, but unless the name is a good one (and let's face it, if you were Banks Violette or Trevelyan Clay you'd hardly need a subtitle) this option can feel like a cop-out, a politer way of saying 'here's some stuff this artist made, we sure hope you can find a connection'.

The matter's complicated by the fact that artists have such mixed feelings about retrospectives. Yes, the honour is a great one, the recognition wonderful, and yak yak yak. But, because the most interesting artwork for any vital artist is always the one they're making next, there's also the creeping fear that attending your own retrospective will be like attending your own funeral. Rather than being brought to life, your art will be consigned to the past.

Ed Ruscha, typically suave, delivered a great response to this predicament in 1982, in the form of his painting 'I don't want no retro spective' (the fascinating full story is here). With that slangy double negative – 'don't want no' – Ruscha gets to have it both ways. And wouldn't you know it, he had his retrospective too: this painting was on the cover of the catalogue.

Sculptor and Ruscha-fan Callum Morton raised the stakes for exhibition titling in Melbourne this week, where his survey show has just opened at Heide Museum of Modern Art. Morton's known to us in Christchurch for his big bad box in De-Building and his quake-anticipating rock-in-a-shop for SCAPE. And for an artist obsessed by memorials and ruins, he has a pretty apt surname – there's a 'morte' in 'Morton', after all.

At Heide, however, Callum has responded directly to the old anxieties about attending one's own funeral. In effect he's gotten in first and pronounced himself dead on arrival, the better to get on with haunting the museum. The show's title: Callum Morton: In Memoriam.