When exhibitions and collections team leader Sean Duxfield and his team got back into the Gallery building after February's earthquake, one of the first tasks on their list was to check and make safe the collection.

They got off to a good start – almost everything that had been on the walls had stayed on the walls. However, they quickly decided that although all our picture hanging systems were fit for purpose, Christchurch's new reality as an area of high seismic activity meant that it was worth seeing what we could do better. In short, beefing up all our systems. Sean and his colleagues started researching the systems used by other galleries in seismically active areas – Japan, Chile, San Francisco – and talking to other gallery registrars, collection managers and technicians about the products they were using.

Sean and his team settled on a system of double ended spring-locked hooks, similar to a climber's carabiner, which ensured that there was no chance of a work becoming accidentally unhooked. But when they approached Japanese manufacturer, Takiya, to buy the hooks they were surprised to be told that there would be no charge. In an amazingly generous gesture, Nobuo Nakamura, president of Takiya, supplied around $10,000 worth of product to the Gallery – an especially touching gesture because the donation came after the horrific Japanese earthquake and tsunami and amid their growing nuclear crisis. As Sean says, 'You would have thought they had enough on their plate, but they still extended the hand of generosity.'

When the Gallery reopens you won't see these hooks – they will be securely tucked behind the paintings. But they are there, and we are hugely grateful for the generosity of Takiya and our other suppliers, who took it upon themselves to lend a hand. 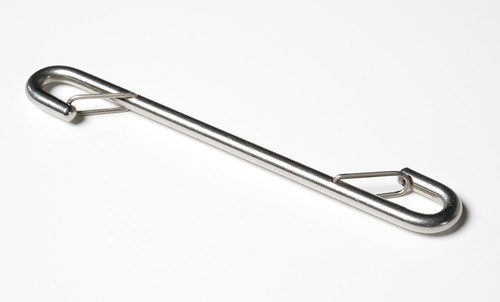