Peter Simpson is the author of Fantastica: The World of Leo Bensemann (Auckland University Press, 2011) and was co-curator (with Noel Waite) of Leo Bensemann: A Fantastic Art Venture, which was shown briefly at the Christchurch Art Gallery in February 2011 before being closed prematurely by the February 22 earthquake. 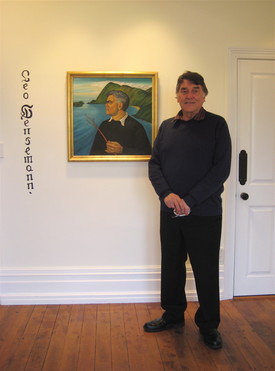 Tuesday May 1, 2012 is the centenary of the birth of Leo Bensemann, one of the most versatile and accomplished New Zealand artists of his generation. Born in Takaka and educated at Nelson College, Bensemann first came to Christchurch in 1931 and lived in the city for the rest of his life. Through his 40–year involvement with such key Canterbury institutions as The Group and the Caxton Press, he was a pivotal figure in the artistic and intellectual life of the city throughout the vital mid-century decades from the 1930s to the 1980s.

Christchurch Art Gallery is fortunate to hold by far the largest collection of Bensemann’s work anywhere in the country, amounting to a total of more than forty pieces in all media, including paintings in oils, watercolours and tempera, drawings in pencil and ink, and wood-engravings, not to mention extensive holdings of his typography, design and book arts in the library. As a centennial tribute to Bensemann the following brief survey of the Gallery’s holdings is offered. All works mentioned can be viewed on the gallery’s website.

When the Robert McDougall Art Gallery bought Canterbury Spring (1961) in the year it was painted, it was the first work by Bensemann acquired by a public art gallery. As one of a 'four seasons' suite of Canterbury paintings it also marked a significant shift in direction towards landscape painting which predominated in the last 25 years of his life. Also in 1961 the sculptor and print-maker Francis Shurrock donated the wood-engraving Death and the Woodcutter (1940). It was more than 20 years, however, before they were joined by two further works, On the Takaka Hill (1979) and Rock Landscape (1983) – a tempera study for an oil painting – both reflecting Bensemann’s fascination with the marble and limestone rock formations of the Takaka region and both purchased from his last exhibition in his life-time at the Gallery Legard, Wellington, in 1983.

Since Bensemann’s death in 1986 the Gallery’s collection of his work has been hugely augmented by a succession of generous gifts and bequests. First came a group of more than 20 caricatures in ink of friends, visiting musicians and local celebrities mostly done by Bensemann in the 1930s (in his twenties) and donated by his widow, Mary Bensemann in 1995. Other gifts came from the Friends of the Gallery (Hills Near Takaka, 1969, a work formerly owned by fellow=Group artist Olivia Spencer Bower), from former Group artists (Rain in the Paradise Garden, Takaka, 1979), from the collection of Canterbury Public Library (Head, 1960, Rain Over Puponga, 1978) and through bequests from friends, such as Bill Sutton (Morning, Takaka, 1977), and Courtney Archer (Pass in Winter, 1971). But the largest and most significant bequest came from Bensemann’s lifelong friend Lawrence Baigent (who died in 1985) and his partner Robert Erwin. In 2003, the year the new Christchurch Art Gallery took over from the McDougall Gallery, they left no fewer than eight Bensemanns to the collection including an early water-colour (The Zig-Zag, Nelson, 1935), the striking imaginary portraits St Francis and St Olaf (both 1937), a tiny portrait of Baigent in profile (Russian Saint, c. 1940), and several unmistakably distinctive landscapes from the 1960s and 1970s, such as Onekaka (watercolour, 1965) – a medium and a subject more closely identified with his friend Doris Lusk – St. Bathans (1966) and Seascape with Causeway (1979).
The Gallery has since added to its collection of Bensemann’s graphic work, such as the wood-engraving, Night (c. 1948) and the drawing that served as frontispiece for the Caxton Press edition of The Rime of the Ancient Mariner (1952). The most recent acquisition is Bensemann’s superb oil portrait of publisher Albion Wright (1947), one of the finest portraits by a New Zealand artist, purchased with funds from the Norman Barrett bequest. Together these works constitute a magnificent legacy stretching over half a century from one of Canterbury’s and New Zealand’s most compelling and idiosyncratic artists. 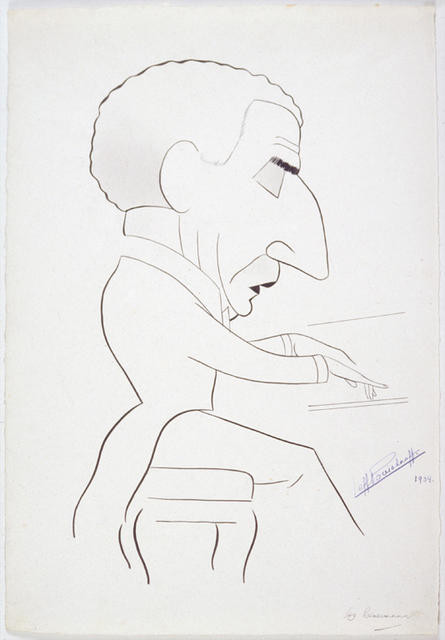 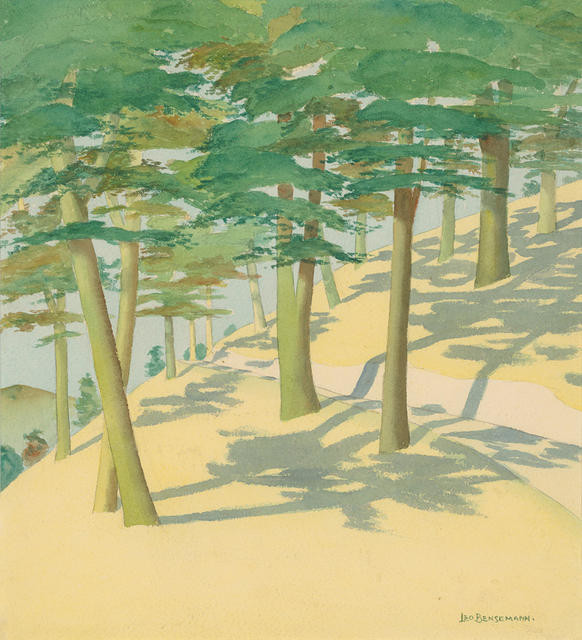 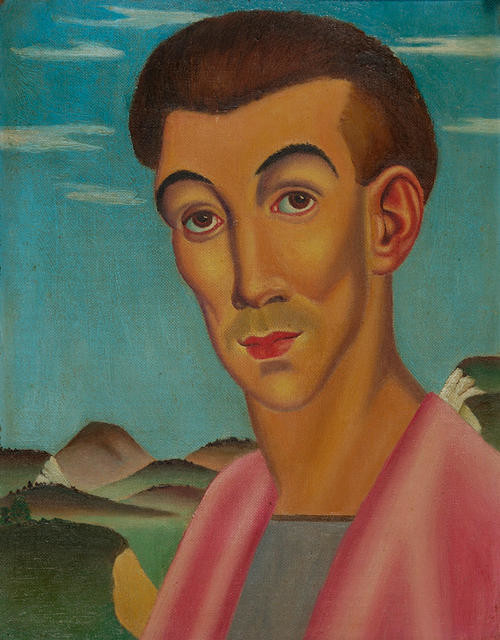 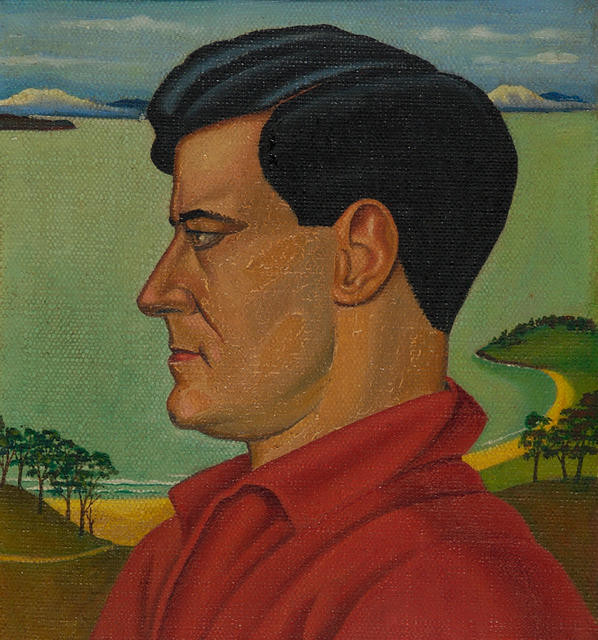 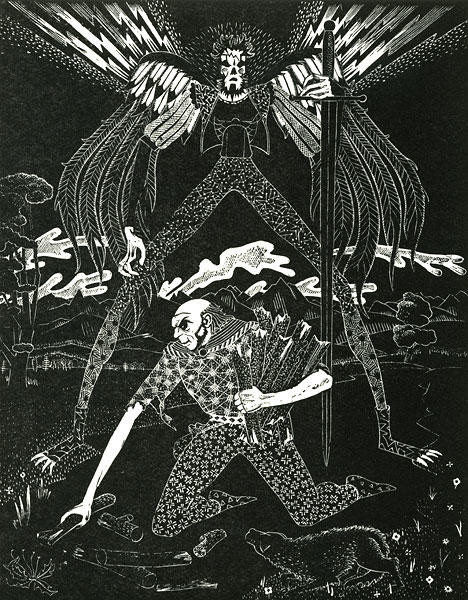 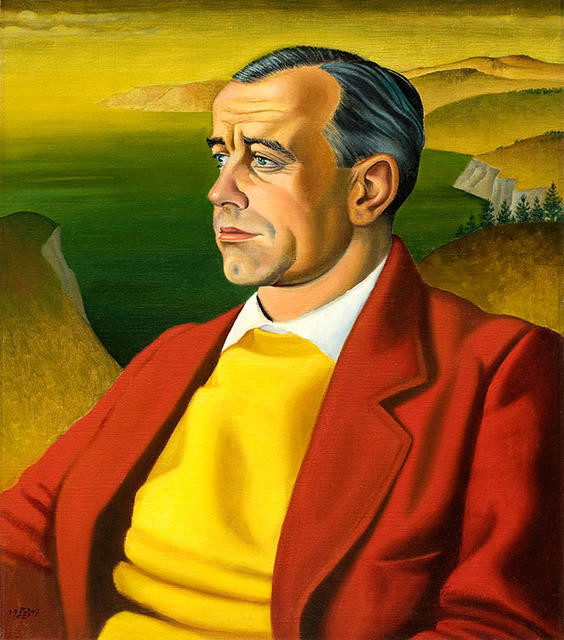 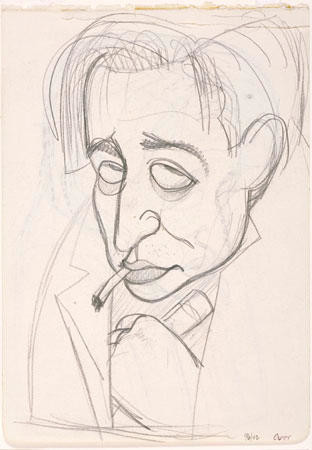 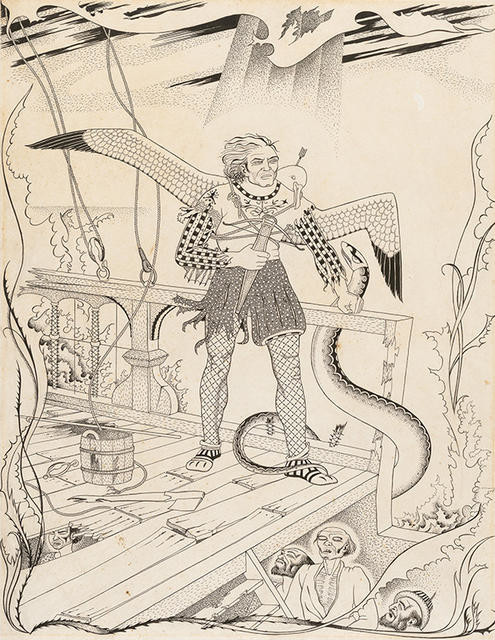 Leo Bensemann The Rime of the Ancient Mariner c. 1952 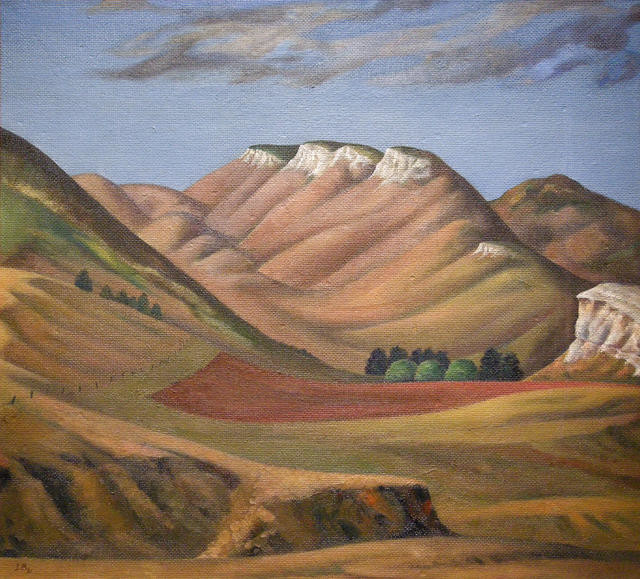 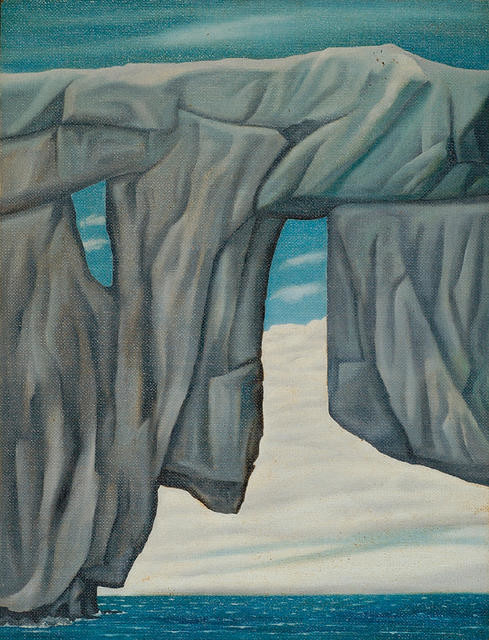 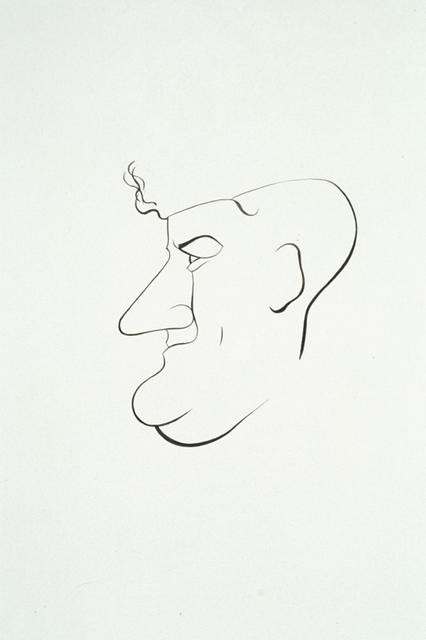 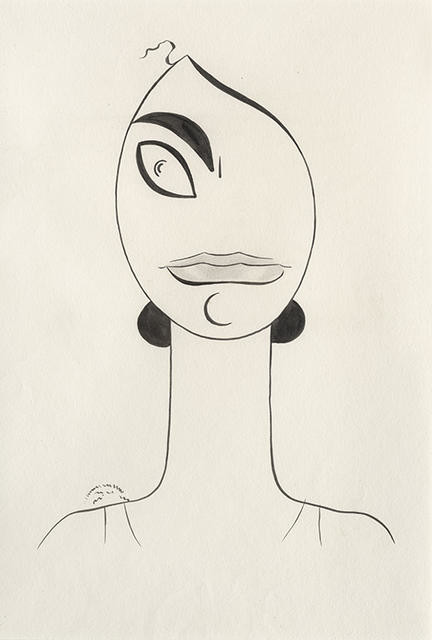 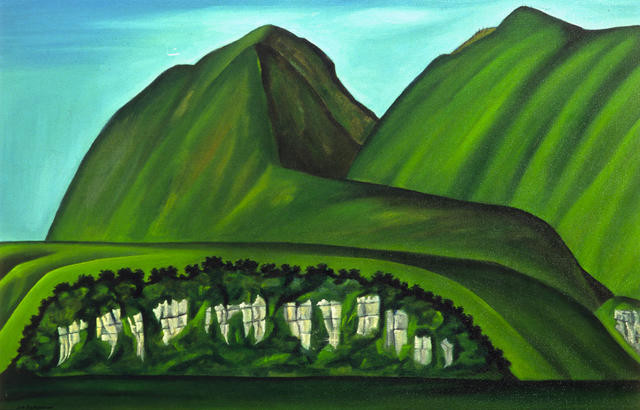 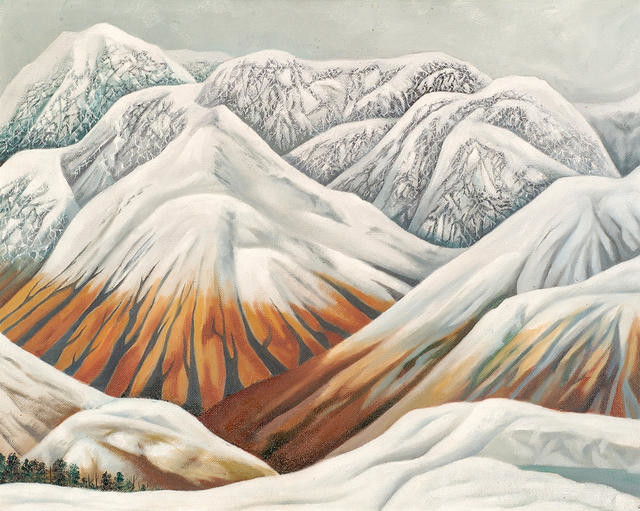 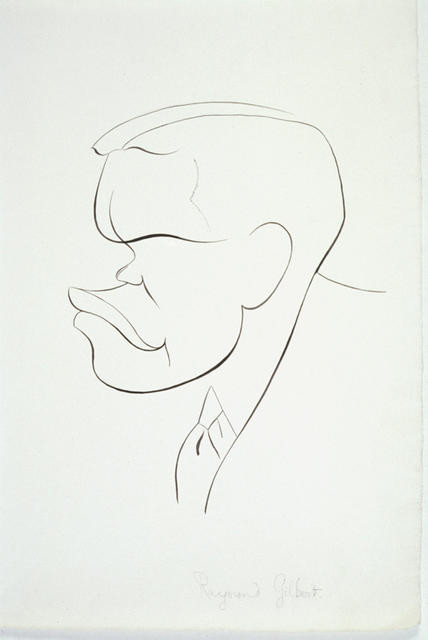 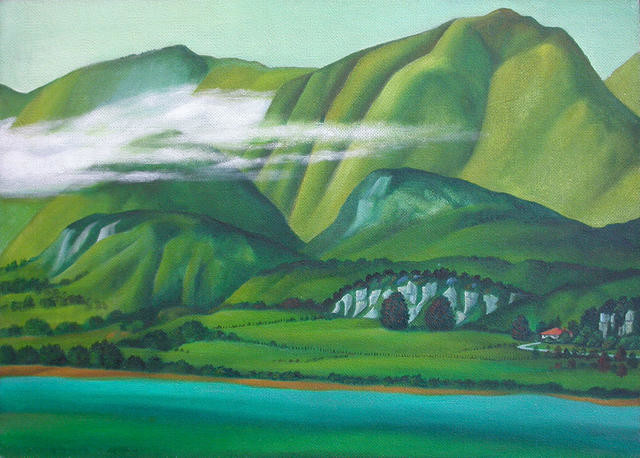 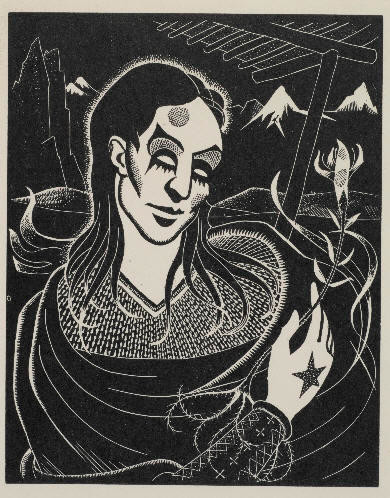