Invitation to the opening of the Word and Image exhibition (detail) 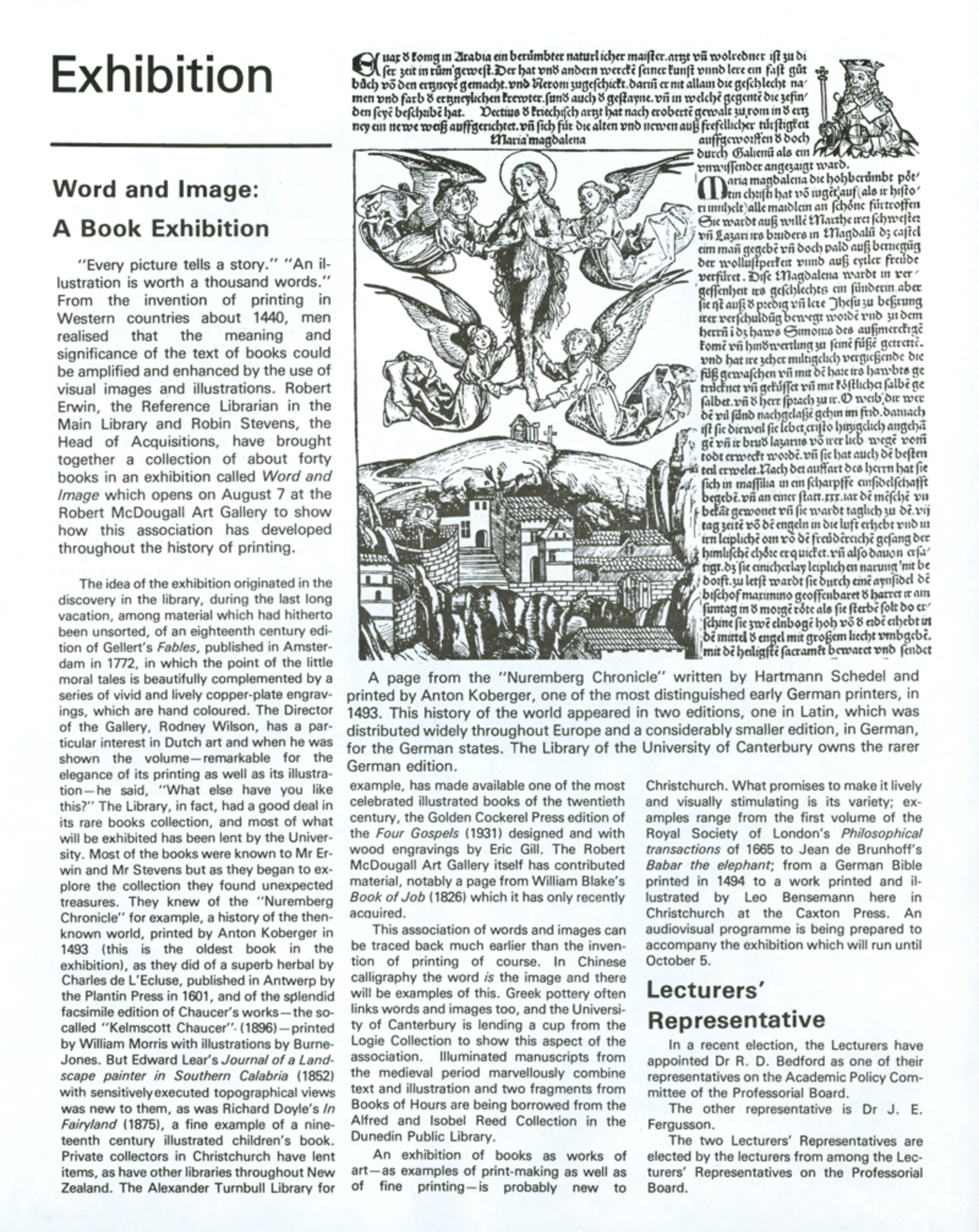 Invitation to the opening of the Word and Image exhibition (detail)

"Every picture tells a story." "An illustration is worth a thousand words." From the invention of printing in Western countries about 1440, men realised that the meaning and significance of the text of books could be amplified and enhanced by the use of visual images and illustrations. Robert Erwin, the Reference Librarian at the University of Canterbury, and Robin Stevens, the Head of Acquisitions there, have brought together a collection of about forty books in an exhibition called Word and lmage which opens on August 7 to show how this association has developed throughout the history of printing.

The ideas of the exhibition originated in the discovery, during the last long vacation, among material which had hitherto been unsorted, of an eighteenth century edition of Gellert's Fables, published in Amsterdam in 1772, in which the point of the little moral tales is beautifully complemented by a series of vivid and lively copper-plate engravings, which are hand coloured. The Director of the Gallery, Rodney Wilson, has a particular interest in Dutch art and when he was shown the volume – remarkable for the elegance of its printing as well as its illustration – he said, "What else have you like this?" The Library, in fact, had a good deal in its rare books collection, and most of what will be exhibited has been lent by the University. Most of the books were known to Mr Erwin and Mr Stevens but as they began to explore the collection they found unexpected treasures. They knew of the "Nuremberg Chronicle" for example, a history of the then-known world, printed by Anton Koberger in 1493 (this is the oldest book in the exhibition), as they did of a superb herbal by Charles de L'Ecluse, published in Antwerp by the Plantin Press in 1601, and of the splendid facsimile edition of Chaucer's works – the so-called "Kelmscott Chaucer" (1 896) – printed by William Morris with illustrations by Burne-Jones. But Edward Lear's Journal of a landscape painter in Southern Calabria (1852) with sensitively executed topographical views was new to them, as was Richard Doyle's In Fairyland (1875), a fine example of a nineteenth century illustrated children's book. Private collectors in Christchurch have lent items, as have other libraries throughout New Zealand. The Alexander Turnbull Library for example, has made available one of the most celebrated illustrated books of the twentieth century, the Golden Cockerel Press edition of the Four Gospels (1931) designed and with wood engravings by Eric Gill. The Robert McDougall Art Gallery itself has contributed material, notably a page from William Blake's Book of Job (1826) which it has only recently acquired.

This association of words and images can be traced back much earlier than the invention of printing of course. In Chinese calligraphy the word is the image and there will be examples of this. Greek pottery often links words and images too, and the University of Canterbury is lending a cup from the Logie Collection to show this aspect of the association. Illuminated manuscripts from the medieval period marvellously combine text and illustration and two fragments from Books of Hours are being borrowed from the Alfred and lsobel Reed Collection in the Dunedin Public Library.

An exhibition of books as works of art – as examples of print-making as well as of fine printing – is probably new to Christchurch. What promises to make it lively and visually stimulating is its variety; examples range from the first volume of the Royal Society of London's Philosophical Transactions of 1665 to Jean de Brunhoff's Babar the Elephant, from a German Bible printed in 1494 to a work printed and illustrated by Leo Bensemann here in Christchurch at the Caxton Press. An audiovisual programme is being prepared to accompany the exhibition which will run until October 5. 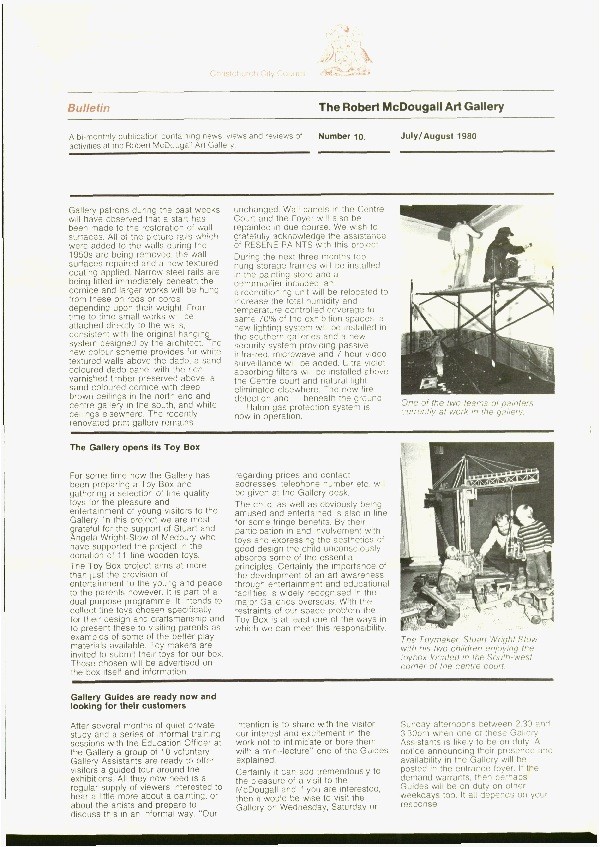 p.1
The Gallery opens its Toy Box
Gallery Guides are ready now and looking for their customers