The body of Werner Bischof was found in 1954 at the bottom of a remote Andean gorge ending the highly significant and illustrious career of a major Magnum Photo journalist of the post-war era. Werner Bischof's work following the Second World War set new benchmarks in the standards of photojournalism.

His Career began in 1936 as a studio photographer but his work became widely acknowledged from 1945 with a series of images from war torn France, Germany and Holland. He also accompanied Swiss relief missions to Italy, Greece, Southern Europe and captured Photographic images in Hungary, Romania, Poland, Sweden and Finland. On the strength of this work Bischof was, in 1949, invited to join the prestigious Magnum group.

Magnum was founded in 1947 by Robert Capa, Henri Cartier-Bresson, George Rodger and David Seymour as a business and co-operative venture. It provided an independent base and collegial solidarity for the creation, definition and enlargement of the photo medium. Their works appeared in the new magazines such as Life. There, as outlined in Henry Luce's prospectus we were able to "see life; to see the world; to eye witness great events; to watch the faces of the poor and gestures of the proud; to see strange things - machines, armies, multitudes, shadows in the jungle or on the moon . . . to see and to take pleasure in seeing; to see and be amazed; to see and be instructed."

Without doubt Bischof contributed to the way photography became a vibrant and often entertaining way of becoming informed. It became a close equivalent to sight and to many a virtual substitute for

the real experience. In the 150 images in this major show we see life itself reflected in the highly skilled photojournalist's sensitive and compassionate work.

This touring exhibition has been organised by his son Marco who will give a lecture at the gallery on 7 February. The exhibition is supported by Pro Helvetia Arts Council of Switzerland, and by Kodak New Zealand. It is toured by the New Zealand Centre for Photography and represents important landmarks in Werner Bischof's work. In it we will see for ourselves the successive stages in his career from studio photographer to committed and highly talented photojournalist. 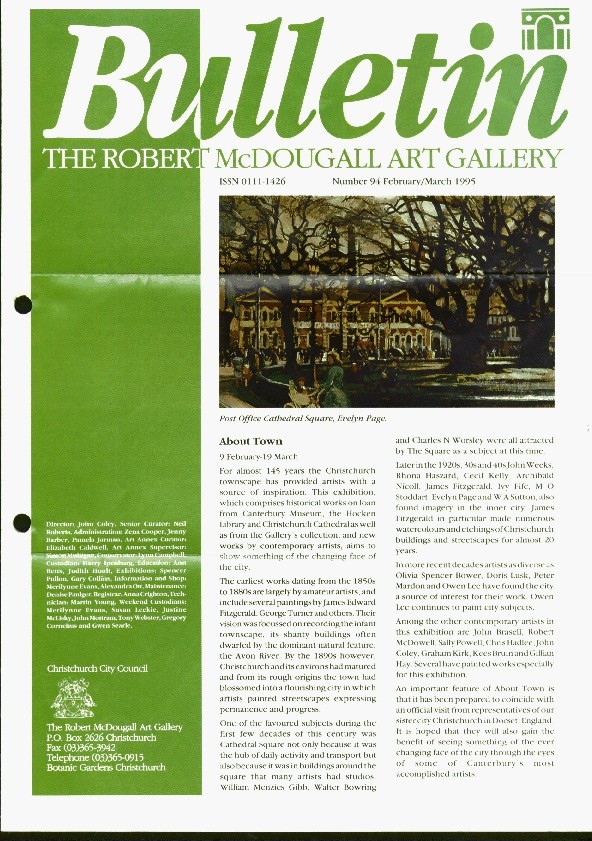