For more than a century, photography has exerted an important influence on imagery associated with perceived reality. Often however the use of the camera by artists as a preparation for a painting has aroused considerable condemnation from traditionalists. For some artists, however, photography is still a very valid process in the realisation of a work.

Two New Zealand artists, Kees Bruin and Graham Kirk, use the camera in the preparation of their imagery. Both are what could be broadly called 'realists,' but, whilst their work shares some characteristics, it is distinctly different. Both construct their paintings from a collage of images but their inspiration springs from contrasting origins, and they have different backgrounds and training. The coming together of the work of these two artists in Two Real is as poignant as the juxtapositions they have made within their imagery.

Kees Bruin has been an active artist in Christchurch for 20 years. Born in Roxburgh in 1954, he studied at the University of Canterbury School of Fine Arts, where he graduated with honours in painting in 1977. Since then he has been the recipient of several awards and has exhibited regularly. Bruin has work in local collections and in Australia, Europe and the U.S.A.

Bruin has termed his work 'visionary super-realism' rather than 'photo-realism'. The photographed image is manipulated, reinterpreted and combined with images from memory or studies from life which are selected to fit the initial vision. As a result he often merges the seen and the unseen. These combinations of imagery are presented via the super-real to heighten the viewers' perception and are, in a sense, metaphors for ideas that can have immense spirituality.

Frequently there is an underlying symbolic message which the artist says is not always realised but for which he is ever searching.

By contrast, Graham Kirk who was born in Hawera in 1948, where he also grew up, developed an early interest in comic imagery and photography. He began exhibiting as a photographer in the 1970s and was included in the 'Active Eye' photographic exhibition. He also drew comic strips, including the Dick Sargeson strip which ran in the Listener from 1984 to 1988. In these works, photographs of acted scenes helped the artist create the final images. This merging of comic and photographic imagery was more completely realised in 1989 when Kirk stopped making comic strips and started painting.

Kirk's concern has always been for achieving a 'truth' in his painted imagery which is similar to that developed through the camera lens and in the juxtaposition of images. The Taranaki landscape, an environment with which he is very familiar, is also a constant element in the background of Kirk's paintings.

The works selected for Two Real have been produced over the past five years. Some feature comic book characters and other recognisable identities from popular culture. Fred Dagg and Elvis Presley are presented as faces on postage stamps to place them in an historical context and, as in the works of Bruin, the images are intended as metaphors with an underlying meaning.

In the setting up of an exhibition, images may be sourced from a number of destinations in New Zealand and beyond and often the juxtaposition of the work by different artists helps to heighten the statement. Two Real is an exhibition of work by two artists who use photography as an initiation process for their painting but who differ in the images they produce. In a broader sense therefore Two Real emphasises how 'photo realism' offers more than one dimension for two artists who refuse to be slaves to the camera image. 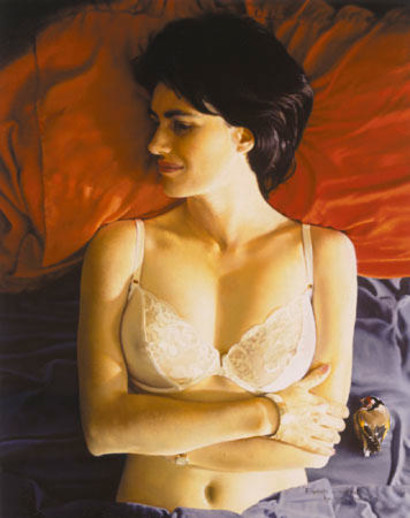