The Much Debated Portraiture of C.F. Goldie

Admired and berated in equal measure throughout his painting career and even today, Charles Frederick Goldie (1870–1947) has become one of the most controversial figures within New Zealand art history.

Although much of his fame can be attributed to a history of vandalism, thefts, record-breaking prices and forgeries, perhaps the most interesting ingredient of the Goldie story is the dichotomy between the public and critical reception of his art work, and how both have changed over time.

The minutely observed realism and limited thematic range of Goldie's canvasses led some early critics to question their artistic merit. To many, they appeared no more 'creative' than the factual recording of Māori already being undertaken through hand-coloured photography. An article in the 1947 Yearbook of New Zealand said of a Goldie painting that it was 'valuable documentation, but not art. A picture by Goldie imparts information and it is only on that level that his work will survive.' One critic considered his work 'more suitable for a museum of ethnology and anthropology than for the walls of an art gallery.' However, just as Goldie's work divides critics today, it provoked opposing reactions when first exhibited, and was often lauded for the same qualities for which it was derided. Another writer in the same Yearbook of New Zealand praised Goldie for his ability to paint pictures which were virtually indistinguishable from a 'subtly tinted photograph,' while one reviewer commented favourably that 'his paintings lose none of their acute detail but rather gain when put under a magnifying glass.'

Goldie's own comments suggest that he regarded the ethnographic merits of his Māori works as more important than mere innovation. When calls were made by critics for him to produce larger paintings of greater compositional complexity, he replied that he would continue with his portraits of individual Māori elders as the opportunity would soon be lost, and that his 'creative work' would follow. Goldie's subsequent attempts at more ambitious compositions, such as The Christ Child in the Temple questioning the Doctors, found by his parents, which was first exhibited in 1911, were regarded by most critics as weak and ponderous, and never received the public acclaim garnered by his portraits. In 1908, readers of the Weekly Graphic magazine placed Goldie at the top of their list of New Zealand's best artists. Gottfried Lindauer, to whom Goldie was often compared, came eighth. Despite the steadfast public acclaim for his work, Goldie was increasingly dismissed by art critics, who became bored with what they considered his unadventurous style and limited subject range. Although Goldie continued to exhibit new works every year until 1919, many were replicas of earlier paintings, depicting sitters who had long since died. In 1930, encouraged by the Governor-General, Goldie sent work to London to be exhibited with the Royal Academy and at the Paris Salon. The disenchantment with his paintings felt by New Zealand critics was not shared by their overseas counterparts, and Goldie received King George V's Silver Jubilee Medal and an OBE in 1935.

Goldie's portrayal of Māori subjects has provoked heated debate between critics and admirers of his paintings, particularly in recent years. Although Goldie may have set out to record for posterity the last survivors of what was then believed by many to be a doomed race, he also saw in the Māori, in their poignant situation at the turn of the century and in their perceived 'exoticism' in the eyes of Europeans, a rich source of material for pictorial story telling. His portraits promote a fixed and narrow perception of Māori as the 'noble relics of a noble race,' and some critics have condemned his work as perpetuating a 'comforting fiction' from a patronising European perspective.

Goldie's paintings strive for mood over historical accuracy, and his compositions and titles are often highly emotive. Unlike Lindauer, Goldie avoided detailing aspects of Māori experience and culture, concentrating instead on the psychology of individual figures and the creation of moving, often imagined scenarios. Although his almost photographic attention to detail and technical skill convey the impression of naturalism, these are deliberately posed and artificial portraits which follow a distinct agenda. Carefully painted to ensure maximum pathos, these beautifully executed depictions rarely show young, vital Māori adapting to and embracing the future, but instead focus largely on often tired-looking elders whose pensive faces suggest weary submission and defeat. Titles such as Tumai Tawhiti: The Last of the Cannibals, Patara Te Tuhi: an Old Warrior and The Last Sleep add to the impression that these Māori are the last survivors of a dwindling race. Goldie's later works reveal his unwillingness to abandon this popular formula, as even into the 1940s he continued to portray elderly Māori in traditional costume and settings, without taking into account the dramatic social changes which Maori had encountered by this time.

Regardless of their often mixed reception, Goldie's individual Māori portraits do realistically depict some of the last chiefs and chieftainesses to wear traditional ta moko, or facial tattoos. As such, they are mementoes of a significant time in New Zealand history, and have become imbued with considerable historical and cultural significance, notwithstanding their artistic importance. Goldie's portraits have always been held in high esteem by Māori, and, because of their importance as ancestral images, are regarded as taonga, or treasures. Te Heuheu Tukino, the paramount chief of Ngati Tuwharetoa and the artist's friend, described Goldie's works as 'he tohu mo nga Māori i roto i te whakatupuranga' – 'icons for Māori of future generations.' When, in 1990, two Goldie paintings, Darby and Joan and The Widow, were purchased by the National Art Gallery and returned to New Zealand from Britain, Mrs Ellen Hulme (a fifth-generation direct descendant of Patuone, an uncle of the two women portrayed within the paintings) was quoted as saying: 'I took one look at them and I knew they were part of me.' When Goldie opened at the Museum of Sydney in early 1998, curator Roger Blackley described the effect as that of a Māori shrine, with around 1500 local Māori gathering in an all-day festival to visit with and share information about their tupuna, or ancestors.

Surrounded by controversy like the work of no other New Zealand artist, Goldie's hauntingly lifelike paintings remain compelling. Whether he is 'our greatest painter,' an 'outdated, academic racist' or no more than a 'second-rate Lindauer,' one thing is certain, the debate surrounding the work of our most well-known painter shows no sign of fading quietly away. 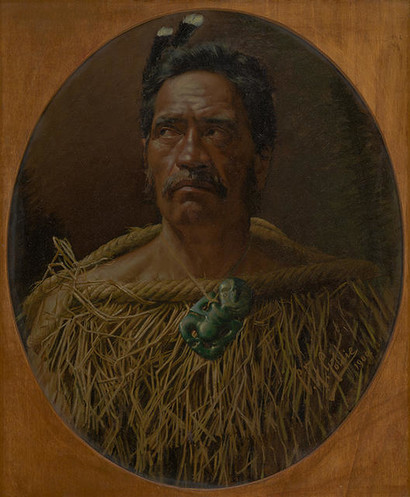 Study from Life or One of the Old School, Wiremu Watene Tautari (Ngāti Whātua) 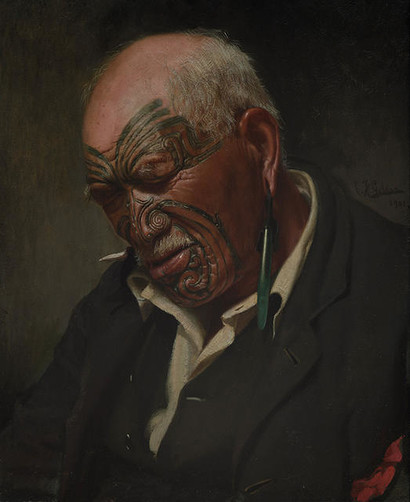 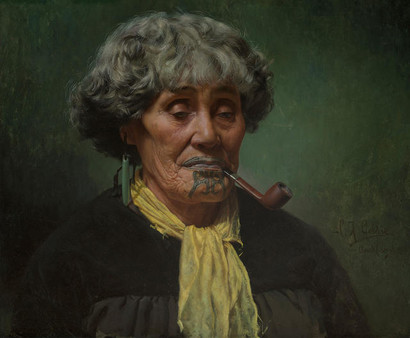