The earliest works are by artists born in the 1880s whose paintings reflect the rapidly changing world in the Indian Territories. These were some of the first painters to consider themselves professional Indian artists. Self-taught and stylistically naive, their paintings are full of the detail of traditional religious regalia and ritual. As the twentieth century progresses new influences make their mark with the paintings absorbing and reflecting the major stylistic trends of the century. The rhythmic lines and simplified, stylised shapes of art deco appears and modern movements like cubism and pop art are all present.

By the 1960s there are also signs of rebellion amongst the artists against what were appearing as rigid definitions of "Indian" subject matter and style and the native artists turn themselves, with passion and intelligence, to address contemporary issues and the creative use of non-traditional art materials. Modern issues like abortion, Indian exploitation, racial stereotypes and land alienation make their appearance.

Shared Visions is therefore, unique in its wide sweep of twentieth century Indian art. It reflects the changing world of the American Indian. It reflects too the American response to the 1992 quincentenary of Colombus' arrival on the continent as this celebration added a level of political substance and urgency to the way the Native Americans view themselves in today's world. Lucy Lippard in her recent book Mixed Blessings: New Art in a Multicultural America refers to these concerns. She considers the multicultural society of modern America to be more of a "rich stew" than the product of a "melting pot".

One thing Shared Visions will confirm is that the Native American artists of today interact in a sophisticated artistic dialogue of international scope yet retain the voice of their personal cultural experience as indigenous peoples.

Two of the contemporary Native American artists, Rick Bartow and Linda Lomahaftewa, will accompany Shared Visions to Christchurch for a few weeks and we are planning some special talks and workshops while they are with us 20 - 27 June. It will be our delight to welcome to the McDougall the artists and the paintings and sculptures of their people.

Sunday 23 June 1996, 11 am - 12 noon & 1 - 2pm. Share the special background to the works in Shared Visions with the visiting artists. But please be aware that, because of the safety of the art works in the exhibition spaces, this group will be limited to just 20 participants. Please assemble in the McDougall Gallery Centre Court for the commencement of the floortalks. 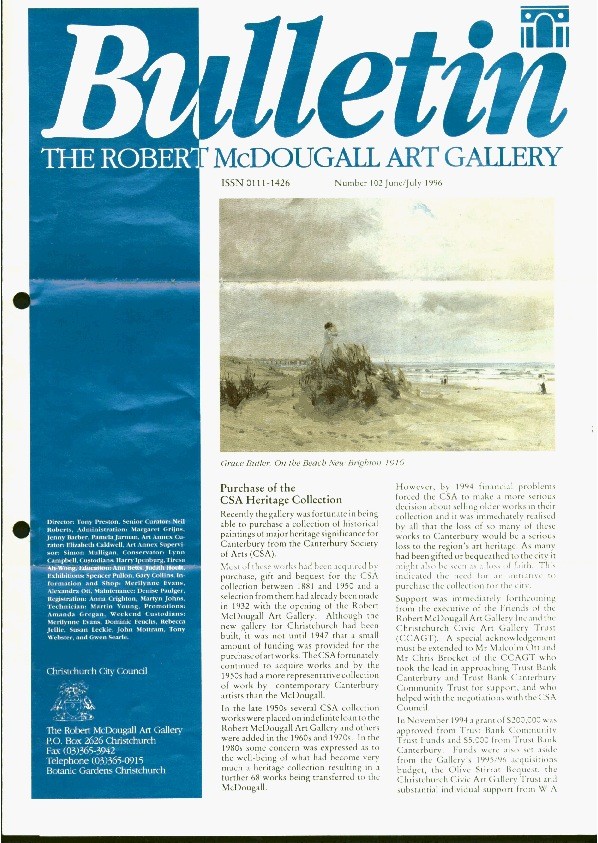