A survey exhibition consisting of 98 works ranging over a period of 40 years by the prominent New Zealand artist Toss Woollaston.

From 1st to 28th of March the Robert McDougall Art Gallery will exhibit a collection of 98 works ranging over a period of 40 years by the prominent New Zealand artist Toss Woollaston.

There is no painter except his contemporary, Colin McCahon, who has a greater regard for and understanding of the New Zealand landscape which he has loved, wrestled with and analysed over a period of some 45 years than Toss Woollaston.

This exhibition which surveys the artist's progress over a period of 40 years has involved the professional assistance of many collectors, gallery staff and other experts in the production of a fully illustrated and documented catalogue.

If there is such a phenomenon as New Zealand painting - and many have promoted such a notion for non-painterly reasons - Toss Woollaston (together with Rita Angus and Colin McCahon) has explored this country and its inhabitants through his art in a manner which has left no room for compromises to superficialities.

The recognition he has received during the last decade has been the result of dogged persistence over a period of several years in the face of official and public opposition to his work.

Born near Toko in Taranaki in in 1910, his farm surroundings provided little opportunity to become involved with the visual arts and his first descriptive efforts were chiefly literary.

However, in 1928, while working in the Motueka area, he was introduced to the watercolour medium by an acquaintance and from this time onwards, his spare time was taken up almost exclusively with sketching and painting.

Apart from some short periods at the Canterbury School of Art in the thirties, Woollaston's work is chiefly self-taught.

After the catalytic experience of his contact in 1934 with Flora Scales, an artist who had studied in Europe under the German painter Hans Hofmann, the artist was to bring many changes to his work which up to that stage had failed to satisfy his needs.

The personal success of his first one-man exhibition in 1936, signalled the start to a sustained exploration of the Napua (Nelson) landscape in which he resided for 15 years before shifting to the damper climes of the West Coast in 1950.

Throughout the first 20 years of his career, when painting was often restricted by the necessity to provide a living for his growing family, recognition of his work was confined to a few far-sighted galleries and individuals who realised that the change he had wrought in the interpretation of the New Zealand landscape were of major importance.

The integrity of the artist to his personal vision despite the obstacles he faced, was officially rewarded in 1958 when he received his first scholarship and went rather reluctantly to Melbourne.

There he studied master works by Rembrandt, Poussin and others.

On his return he was awarded a second grant which allowed him to paint full time for a period, a luxury which he enjoyed to the fullest degree and resulted in some of the most sustained and best efforts to date.

His efforts were rewarded by a further travelling grant shortly afterwards and in 1962 he journeyed to Europe and the United States to pay homage to some of his "idols" notably Constable, Goya, Turner, Cezanne and Rembrandt.

It was during the early sixties that Woollaston started to receive an increasing amount of recognition within the official art world and in 1963 the Auckland City Art Gallery mounted an extensive retrospective exhibition of his and Colin McCahon's work which toured New Zealand.

Despite this success however, Woollaston still could not afford to paint full-time. "This luxury, as most painters have found, only comes if their work is vigorously promoted by a commercial gallery."

Between 1965 and 1968, the artist had several successful one-man exhibitions in Auckland and he soon saw his way clear to paint full time, free from the need to personally sell his work and free from the pressures of a growing family.

Woollaston, who lives once again in the Motueka area, at Riwaka, continues to paint the landscape in those areas he has come to know so well: Nelson, Taranaki and the West Coast, landscapes which are neither picturesque nor easy to come to grips with.

As with his figurative and portrait studies which are in essence, extensions of the landscape, Woollaston's concern is with the underlying reality of the subject and not its superficial appearance, and over the last 40 years he has painted with a single-minded devotion which has few precedents in New Zealand. 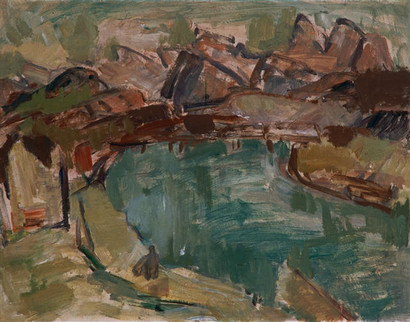 Woollaston on the Port Hills