Barry Cleavin: The Elements of Doubt

For some time, Cleavin has observed the polarities of human identity. These observations have in turn often given rise to prints where sardonic images challenge the absurdities of humankind and our interaction with other species.

It is Cleavin's contemplation of human destruction of other species, particularly New Zealand fauna, and the temporary nature of existence, that forms the important focus for many of the works in The Elements of Doubt.

Comprising 110 prints, mostly made during the past three years, this exhibition includes eight sets, titled: In the Past Tense, Paradoxes, Parodies and Palindromes, Gander Issues, The Elements of Doubt-Avian, The Elements of Doubt-Simian, The Hungry Sheep Look Up, Of Traps and Snares and The Negotiating Tables.

Barry Cleavin, like other artists, has taken the impetus for his imagery from a variety of sources known but rarely seen. But The Elements of Doubt adds an extra dimension through the inclusion of several skeletons, juxtaposing source and image. This show allows the meeting of objects from two museum worlds that normally would not have any exhibition association yet they can exist in the collections of both, although sometimes only as images.

The Elements of Doubt is the first major showing of Cleavin's work in this gallery since the touring retrospective Ewe & Eye organised by the Auckland Art Gallery in 1982.

We are most grateful to the Auckland, Canterbury and Otago Museums for the loan of skeletons which enable The Elements of Doubt to be not only an exhibition with a purpose, but also one with a difference. 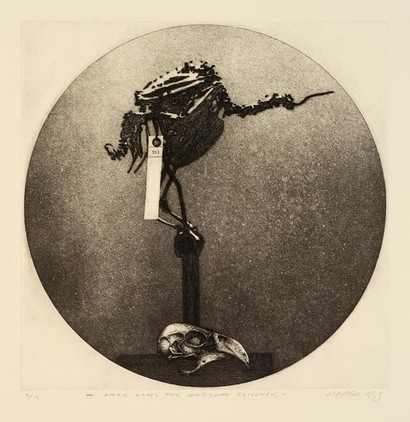 A Dark Glass for Andreas Reischek