Appropriation—specifically, the use of indigenous cultural material by non-indigenous artists—was one of the critical issues of 1990s art in New Zealand, mirroring the other arguments about Māori land and property rights that were being waged in wider society. Michael Parekowhai’s monumental work Kiss the Baby Goodbye made a major contribution to that heated debate, when he reworked Gordon Walters’ painting Kahukura, completed in 1968—the year of Parekowhai’s own birth—as a sculpture in three dimensions, a giant kitset model ready to be snapped out and made up.

In the late 1980s and early 90s, Walters had been both vigorously attacked and fiercely defended for his earlier use of the pītau (fern frond) design taken from kōwhaiwhai panels in wharenui. Parekowhai’s Kiss the Baby Goodbye was an adaptation of Walters’ painting that both acknowledged the older artist’s work and asserted Māori ownership of its significant forms. It also brought the pītau design back from two dimensions into architectural space.

Christchurch Art Gallery’s work is a smaller version of Parekowhai’s original, made for his first major solo exhibition in 1994. Both sculptures share something not included in Walters’ painting: a final circle at the bottom right corner, which appears like a full stop. Parekowhai, it seemed, would have the last word. 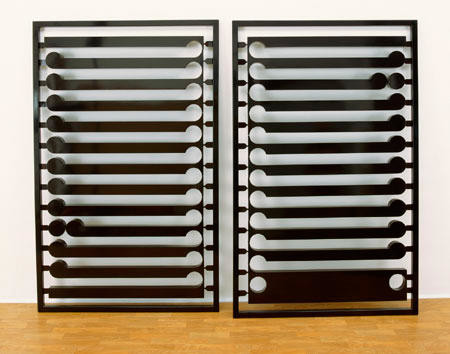 Michael Parekowhai's powerful bronze sculpture of a bull standing on a piano captured Christchurch's heart. After spending the winter in his crate, he's back in time for spring.