Crosses often appeared in Philip Clairmont’s work and here he has presented the Crucifixion as a universal symbol of human distress and agony. Like all of Clairmont’s work, the sense of torment and anguish captured within this screenprint are a direct reflection of his attempt to convey his personal experience of life. This work is neo-expressionist in style. The composition is dramatic and energetic and seems to vibrate with light, colour and movement. Clairmont was influenced by the work of the German Expressionist, Ernst Kirchner (1880 - 1938). In Expressionism natural colour and form are intensified and distorted to provoke an emotional reaction in the viewer. Born in Nelson, Clairmont moved to Christchurch in 1967 and studied at the University of Canterbury, graduating in 1970. He participated in individual and group exhibitions throughout New Zealand and also contributed to several underground magazines. Clairmont moved to Auckland in 1978. He received Queen Elizabeth II Arts Council Grants in that year and in 1982. 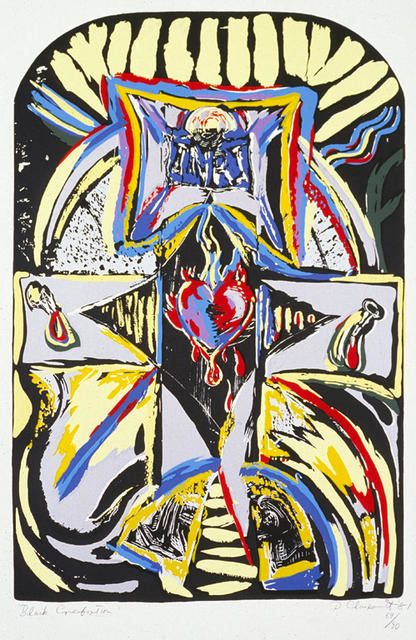