In reality, mudfish are slab-like creatures but, with his typically humorous approach to clay, Steve Fullmer has given this mudfish a comic, almost human air, with its large, oversized mouth and stylised eye. Fullmer, an American artist, has drawn on the American Indian tradition of hand-built forms. He has used a coarsely textured clay mix to create the quality of aged skin. Fullmer was born in Oregon in the United States. He trained at Long Beach Junior College and arrived in New Zealand in 1973. He settled in the Nelson area in 1976 and has his own studio workshop. Fullmer has won three Fletcher Brown Built national ceramic awards and was one of a small group of artists to exhibit in the New Zealand Trade Exhibition at Expo 88 in Brisbane. Since then, Fullmer has exhibited internationally. In 1992 he was commissioned to create ceramic work for the ‘Treasures of the Underworld’ exhibition in the New Zealand Pavilion at the World Expo in Seville, Spain. 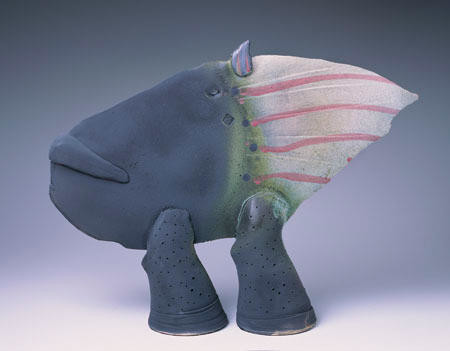