Red deer explores the idea of the layers of clay, dirt, dust, ice, rock and living beings that make up a geographical place. It represents a shift in focus for Robert Shay who wanted to highlight the properties of clay and his response to the land. An earthenware work, Red deer has been multifired. Shay incorporated unusual materials, such as rock salt, used-up batteries and copper, in the first firing. The chemicals in the materials created effects of scarring and pitting on the surface and, working with these, Shay then added the glazes. A Native American, Shay was born in Brooklyn, New York. He graduated from the University of Wisconsin in 1973 and is currently a Professor and Dean of Fine Arts at the College of Fine Arts, University of Kentucky. In 1986 Shay was the first City Gallery artist in residence in Wellington. He has exhibited widely in the United States and has received numerous awards, including a Purchase Award at the International Ceramic Competition in Faenza, Italy, in 1983. 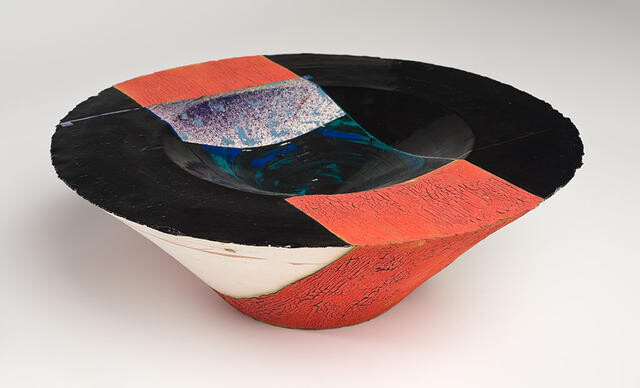