In 1982 Robin White left New Zealand with her husband and son and travelled to the Republic of Kiribati in the central Pacific. "[I] made a home and a house of sticks and thatch beside the lagoon of Tarawa Island. I asked the names of things, rather as a child would. My teacher was a young Gilbertese girl called Florence. I would draw something and ask Florence what it was and then I would write the Gilbertese name next to my drawing. As I worked I was exploring a new language, culture and environment, clinging to the images as they gradually became familiar to me." White chose to resolve her Kiribati works as woodcuts, a new medium for her, which was portable and robust. In this work, part of a series called 28 Days in Kiribati, Florence is shown sitting in the shade beside the lagoon. A red comb in her hair, she looks out towards the ocean. Beneath her image, White has included a drawing of one of the ever- present ‘creepy crawlies’ she encountered – a roata (centipede). 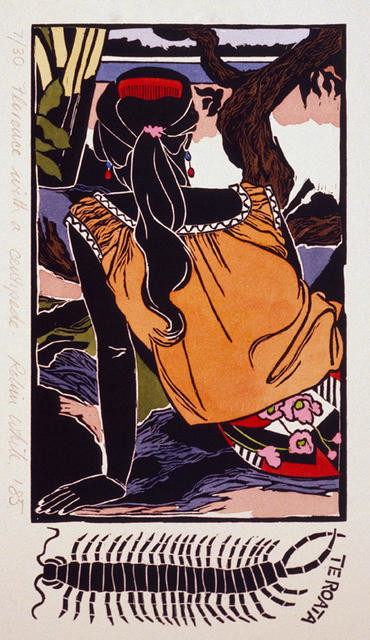