The style of Drum Process is known as ‘assemblage’. This is a technique in which an artwork is assembled from found (pre-existing) objects, rather than being directly created through mark-making or carving. The ‘subject’ of the work is the arrangement and juxtaposition of colour, texture and shape. Assemblage first began in the early 20th century with such artists as Georges Braque (1882 -1963) and Pablo Picasso (1881 -1973). However, Don Driver’s work relates most strongly to the work of American artists such as Robert Rauschenberg (b. 1925) and Jasper Johns (b.1930). Drum Process is a strong example of his distinctive brand of formal Abstraction, constructed from the everyday materials of popular New Zealand culture. Driver didn’t receive formal training in art but took night classes in woodwork, welding, drawing and pottery. He first began working as a sculptor in a Primitivist style and also exhibited paintings. It was in the early 1960s that he began to develop the assemblage style for which he is best known. 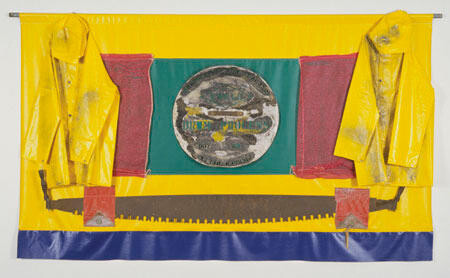