Trevor Moffitt has painted his father, Gilbert, as an archetypal Kiwi father – a lover of rugby, racing and beer. Holding a betting paper, he appears to be arguing with his unseen son. Fearing what he doesn’t know, the father would deny his son the chance to step out of his familiar masculine world. This work is part of a series of 139 paintings Moffitt did of his father. One of New Zealand’s most respected regional artists, Moffitt was taught by such Canterbury artists as W.A. Sutton (1917–2000) and Russell Clark (1905 – 1966) who, along with Rita Angus (1908 - 1970), searched for a particularly New Zealand style. Moffitt’s interest has always been with the places and stories unique to this country. Moffitt grew up in the gold mining township of Waikaia, in Southland. During the 1950s he attended the University of Canterbury School of Fine Art, despite his father’s opposition. He lived in Christchurch, working as an art teacher and exhibiting extensively. He died in 2006. 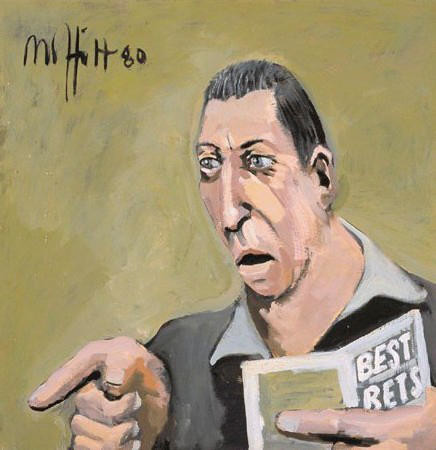