On 11 March 1840 Jules Dumont d’Urville, commanding the French ship Astrolabe, sailed from Hobart to the subantarctic Auckland Islands. This sweeping view is of the bay originally known as Sarah’s Bosom (renamed Port Ross in 1849) at the northern end of Auckland Island. The Astrolabe and the Zélée lay at anchor in the sheltered harbour for eight days in March 1840. While the scientists on board explored the region, collecting bird, plant and rock samples, Louis Le Breton recorded this scene. Le Breton was a surgeon, and later official artist, on board the Astrolabe, which completed a scientific expedition in the southern hemisphere between 1837 and 1840. He produced more than 170 sketches, providing some of the earliest known pictorial records of the Auckland Islands. Many of these were reproduced as lithographs to accompany D’Urville’s account of the voyage, Voyage au Pôle Sud et dans l’Océanie (Voyage to the South Pole and in Oceania), published between 1842 and 1846. 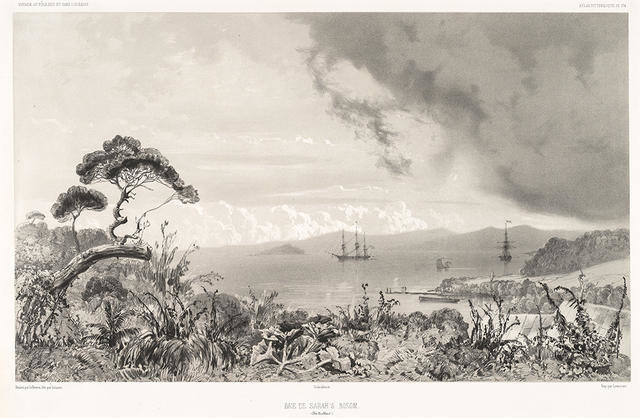