The February 1757 issue of the London Magazine, describes this event in the following terms:

A particular and true account of the unfortunate Capt. William Death of the Terrible Privateer, which had 26 carriage guns and 200 men.

On the 23rd of December she engaged the Grand Alexander, from St Domingo, bound to Nantz, a ship of 400 tons, 22 guns, and 100 men, and, after a smart fight of two hours and a half, in which capt. Death's brother, and 16 of his men, were killed, he took her, and put 40 hands on board. On Dec. 28, in convoying his prize (which was very valuable) to England, the Vengeance privateer, of St. Maloes, 36 guns, and 360 men, bore down upon her, and retook the prize; then the Vengeance and the prize both attacked the Terrible, she being between them, and shot away her main-mast the first broadside; and after the most desperate and bloody engagement ever known, (for one hour and a half, in which Mons. Bourdas, the French captain, his second, and two thirds of his crew; capt. Death, almost all his officers, and the major part of his crew, were all killed, to the amount of near 400 on both sides) the Terrible was taken and carried to St.Maloes in a shattered, frightful, and bloody condition, having no more than 26 of the crew left alive on board, 16 of whom had lost arms or legs, and the other 10 were mostly wounded. 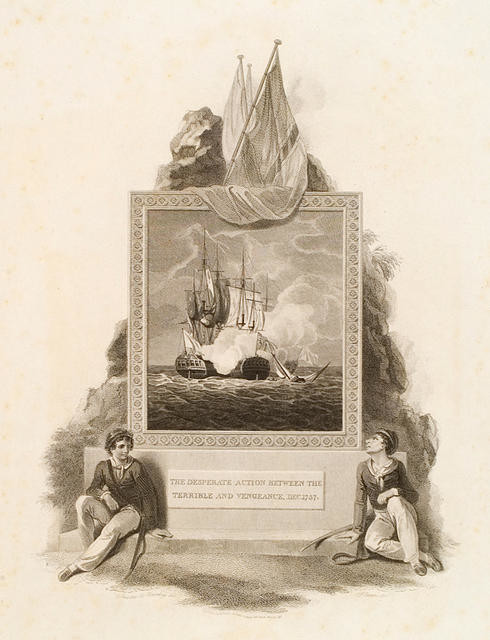