From the Book of Tobit in the Old Testament Apocrypha, the story of Tobias was the subject of a painting by the German artist Adam Elsheimer (1578-1610). Hendrik Goudt was an amateur engraver who faithfully copied Elsheimer’s work in this engraving. In the 18th century illustrations of biblical stories were popular with the middle classes. Goudt is credited with being one of the first Dutch engravers to successfully approach the problem of translating the strong light and dark contrasts of the painting technique (chiaroscuro) into an engraving. He achieved his effects by delicately crossing and re-crossing his lines where shadows were required. Count Hendrik Goudt was born in The Hague. He studied in Rome where he became acquainted with Elsheimer, whose paintings strongly influenced him. From 1611 Goudt was based in Utrecht. He was enrolled in the artists’ guild as a nobleman and continued to work on what were known as his ‘night pieces’ after the originals by Elsheimer, which he owned. 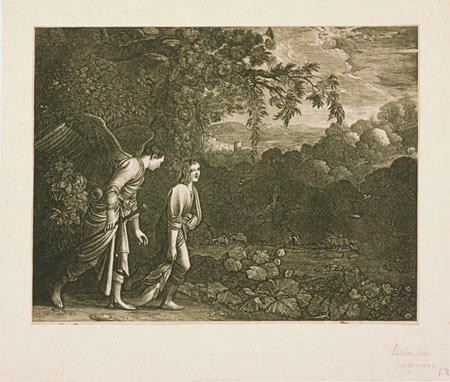