Marion Lorna Guthrie was 10 years old when James Guthrie painted this portrait of his niece. Lorna’s father, Dr John Guthrie, was working at Glasgow Hospital at the time, but the family had emigrated from Scotland to New Zealand in 1874. The portrait was influenced by the poses and limited colour palette used by James Whistler(1834 -1903), whose works Guthrie would have seen while he was working in a nearby studio in London. Although Guthrie began his career painting landscapes, it was with portraiture that he was to have the most success. Born in Greenock, Guthrie began a career in law but gave it up in 1877 and began studying art in 1879. He visited Paris in 1882 where he was influenced by the French plein air painters. He returned to Scotland where he became a leading member of the Glasgow School of artists. In 1902 Guthrie was elected President of the Royal Scottish Academy and in 1903 he was knighted for his contribution to art. 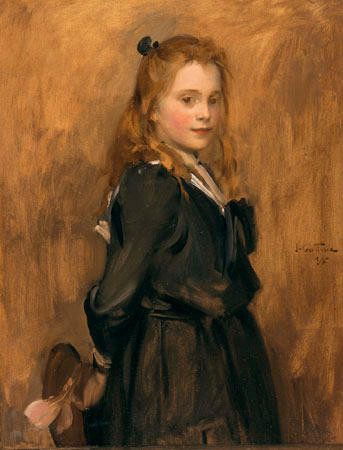