The basis of the imagery in this print is the biblical story of Paul pleading his case before Felix, Governor of Judea. However, William Hogarth has used it to parody and criticise the Dutch and Italian art being imported into Britain. Hogarth used the print as a subscription ticket for engravings of his history paintings. This was a practice he introduced whereby small engravings were issued as receipts for advanced payments on larger printed works. This is a very rare version of this print with the subscription ticket attached, sealed and signed by Hogarth. Hogarth was born in London where he established his own engraving business. He also studied painting and by 1730 had established himself as a portrait painter and began painting what he called ‘modern moral subjects’. These series were successfully engraved by Hogarth, enabling his art to reach a wide audience. Many unauthorised copies were made of his work and it was Hogarth who successfully campaigned for the Copyright Act to be passed, which it was in 1735. 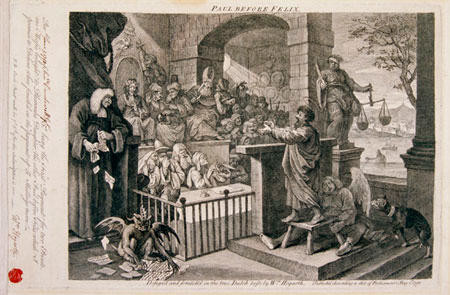