In Conspirators Edgar Bundy depicts a purely imaginary scene in a Tudor banqueting hall where all but three of the company have succumbed to drugged wine. The conspirators are plotting their course of action. It is a typical example of Edwardian history painting, full of narrative detail and careful historical references in the costumes, architecture and furnishings. Bundy specialised in painting historical and genre works in oil and watercolour. He was influenced by the writings of John Ruskin (1819 -1900) who championed Venetian Gothic and held medieval art in high regard. Bundy was born in Brighton in 1862. He studied in the studio of Alfred Stevens at an early age but otherwise had no formal training. He exhibited at the Royal Academy from 1881 and at the Paris Salon from 1907. He was made an Associate of the Royal Academy in 1915 and went on to become a member of the Royal Institute of Painters in Watercolour and the Royal Society of British Artists. 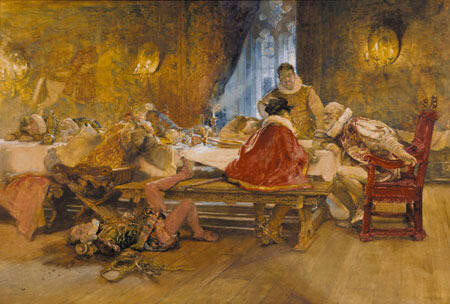